Guys, what is this with new Episode update. It’s really everything up and down. 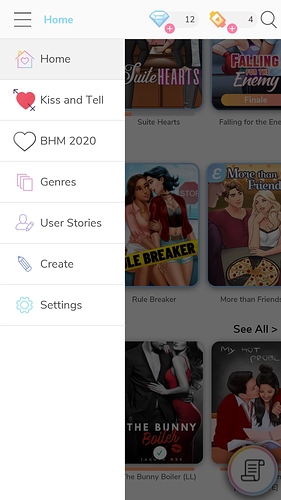 Hey Episodians! Episode is always testing new features and experiences for our authors and readers. One of these tests, which we began in 2018, was our Social Feed. Most of you will have not had the Social Feed in your app, as we only rolled it out to a small portion of players. Over the Social Feed’s life, we received feedback that it didn’t improve authors’ or readers’ Episode experiences like we’d hoped it would. Based on what we’ve learned, we’re working on removing the Social Feed from th…

Here is the thread on that. Though, I still see mine.

Nevertheless the profile should be there! Submit the ticket.

Can you tell me how?

See the screenshot you posted? Go to settings. There you will find “Contact Support”. That’s how I do it. But before clicking there, copy your Support Id number.

Android users dont have it anymore

Hey Episodians! As you all know, our team is always working on improving the Episode experience for readers. In exciting news, we’ve made some MAJOR technical changes to our Android app that should improve loading times, remove common bugs, and make animations play more smoothly. However, with this upgrade, we did have to temporarily remove two features while we get everything up and running: Profiles and Story Share Links. These will be returned as soon as they can in a future app update. We…

if you check the post @Epi.milkyway linked it says that its not permanent

Hey, dont worry, you’re not the only one. I just finished reading the first chapter of hidden shadows and there was an option to pay 15 gems for a bonus scene. I also dont think it’s fair coz it’s a community story, so I honestly dont think there should be any gem options.

I just finished that story as well and didn’t have to use gems for anything, but that was before I did this last update that ruined everything.

Many authors are adding gem choices to try and help them get into the writer payments a little easier. Most that I know, do not have critical scenes as a gem choice, but something extra to try and earn some extra reads toward payments.

Authors add this as a way to make or help with their payment program. Also the only reason this is there is because initially only 15% of users in total could view gem choices in user stories, but it seems this new update has made gem choices visible to all. The gem choice was always there, you are only able to view it now because of the update.

The gem choice was always there, you are only able to view it now because of the update.

Are you seeing gem choices for 15 as well @PoojaI ? I have an iOS device so I still can’t see them, but this bothers/worries me since technically, gem choices in user stories shouldn’t be more than 10 gems (if a story has >100k reads). From screenshots I’ve seen, most people are seeing 15 gems? I know when the feature was released, they said a tiny portion of readers might see gems for 15, but it seems to be everyone?

I haven’t seen any gem choices yet. Don’t get them on iOS and I also haven’t gotten the Android update (maybe it’s not available in my region yet idk).

Definitely seems to be more than 2.5% of users

Gem choices in User Stories will have automatic pricing.
The community was worried that prices for gem choices would be too high so in community authored stories these choices will have prices set automatically. For now, prices will be capped at 10 gems or less. During the rollout phase a small number of you (2.5%) will see these prices as 15 gems, you will also not see the tiered gem choices described below.