I found this today: 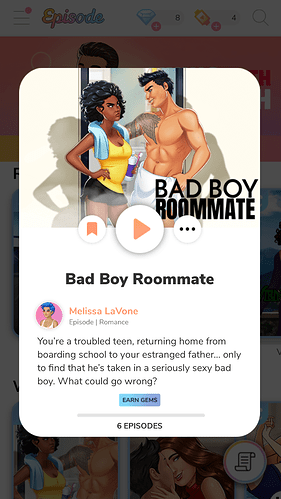 It’s a featured story, I believe an user-written one too, not Episode Original.

I think I’m a beta-tester for once…

does anyone else have it?

i have it… im gonna check it out

I got it too. Why do they have a black character on the cover but the Mc is white? Why do they always do this?

They don’t know the difference between diversity and tokenism.

why do their stories have to have a gem choice within the first minute? calm down!

hm okay well i wasn’t expecting much but it’s cliche and unoriginal. not the worst they have released recently though, in my opinion

Episode is running out of ideas so they’re purchasing user stories now.

He’s not the worst type of bad boy. I actually read about 4 episodes. It’s really not that bad. They act like children with crushes (stomping on each other’s foot was funny lol) so it’s pretty light-hearted. I like it. But I agree with the cover, the default MC isn’t black, so why is she shown as black in the cover?

Again… it’s the same stories over and over… this is getting tiring.

I don’t know this story, both this version and the original one, bu this reminds me of Sandra G’s Living with my Crush (yet coming from the comments the default MC there is black).

And sorry, with the way the summary is worded, I can’t help but think the dad brought in the bad boy for … ulterior motives

And sorry, with the way the summary is worded, I can’t help but think the dad brought in the bad boy for … ulterior motives

He’s the legal guardian of the bad boy.

So a Wurthering Heights situation? Interesting
Goddamn I’ve read too many reportable bad stories that I’ve assumed the worst. So how’s the story overall?

It’s not bad. There’s like one “steamy” (?) scene. But I didn’t pay gems so I’m not sure what it actually is (basically MC and the bad boy sing together in a bathroom). It’s actual romance, not a sex-centered story.

When I first got it, it said that the author was Talia Rose. Weird…

Damn, they’re really cranking these out.

I don’t think I have it. I hate that Episode only releases featured stories for certain people to read it.

It’s beta testing. I haven’t got anything before, this is my first time. You might get something next time. Check your app regularly.