This is my first story in using this app, so I’m curious how these kinds of stories work, can ya’ll enlighten me?

So, I start off using no gems. That’s boring I start using Gems. I hate Ethan off the bat and never do anything with him. I get fired from my job (at the time I thought it was from choices I made, but I guess that happened to everyone?), I choose to work with Daniel (again, would people have ended up working for him even if they said no?), I go to the Gatsby party and meet Liam and all that stuff.

I go on dates and have sex with Noah, Austin, and Liam. Noah disappears then Austin disappears then there’s a wedding pre-party and everyone is there and Ethan tells me he’s in love with me and always has been. Super weird because, again, I barley know Ethan. I tell Isabel I want to pick Noah and she says “He’s not here so pick someone else” so then I pick Liam, we go on the farris wheel and talk about marriage.

Can someone explain to me how these stories work? How much do your choices impact your end-result? It seems like they don’t, really. Do gem choices make a difference? I was hoping that if you did your choices right, you could end up with Brandon (bartender) or something, but it doesn’t seem that way.

Thanks! This will help me in future decisions to spend gems or not.

I’m going to be honest, as much as the app will push you to start with their Episode Original stories, they really aren’t the best examples of what the app has to offer.

Nevertheless, here’s a bit of a rundown:

Thanks! This is helpful.

I’ve started some user stories, I will probably finish iridescent. Any other you all recommend?

Check out these threads for some user story suggestions:

Hey guys! I decided to close this thread because: I have to accept I can’t read all the stories here I don’t want anymore threads to be merged here I will leave this open for a few days, so you could bookmark it or save some stories if you would like to, and of course I will also keep reading them when I have the time. Here is the amazing list made by the amazing @amberose:

Hello Authors and readers, What is your favorite Ink stories. Read or written, Share here. Mine is as below: [BeFunky_photo__1541325807_47588] BeFunky_photo__1541325807_47588.jpg800x515 494 KB Plot: This is the story of Anne. She was adopted at the age of 2years old and lives in a very nice house in Virginia. From an external point of view her life seems like a dream but her reality is more a nightmare. Her adoptive mother hates her and never accepted her. Anne is in love with Carter…

This is an easy way to promote your stories. Also an easy way to find an interesting story in Limelight just in case you favor it over ink and classic. Here’s mine. Name: Pregnant by my Best Friend (Limelight) Author: BRIE (me) Episodes: 5 (ongoing) Updates: 1-3 episodes a week Style: Limelight Genre: Romance (slightly dramatic too.) Summary: Sage Hudson has been best friends with Jax all her life. When Sage moves in with him things get a bit steamy. Will getting pregnant by her best fr…

Hellooooo, I really am out of new stories to read, but I only tend to like the ones where choices actually matter and are well written, can anyone name me a few, please?

(The last thread is about stories that have choices that matter, so if that was what you wanted when reading Love Life, you’ll find those types of stories there)

Thank you! This helps a lot. Yes, choices actually mattering makes a difference! although it has been fun reading now and knowing the choices DON’T matter…I get to be a huge b**** and it doesn’t make a difference haha

Hahahaha, the one time in life you can pursue multiple love interests and not be held accountable or have to deal with jealousy is in an Episode featured story

Stay tuned for the periodic release of my rambles! This being weirdly my longest yet.

Anyone curious to know what a romphim is, be my guest: 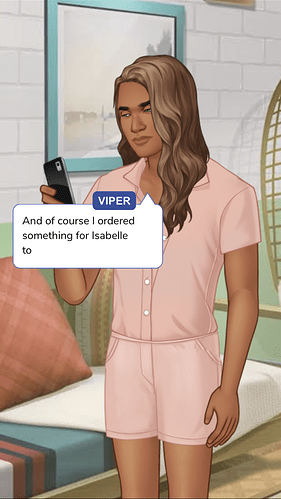 Your summaries are the reason I keep coming back to this thread (post? topic?). Anyway, I was kinda surprised you picked Liam because in the previous summaries you kept mentioning Austin

I really don’t know, I guess in hindsight the narrative gave fewer (non-gem) opportunities with Austin in comparison with Liam. Maybe it was because MC didn’t have a negative thing about Austin, that she haven’t also spent enough time. Again, weird logic

I chose Noah at first, and Isa says “ok well Noah isn’t here, so pick someone else”. So then I picked Liam. Then Isa says “ok good, because he’s right behind you”, then I make a comment like “uh did you hear everything I said…” which Liam confirms he didn’t hear me pick noah first. I found this part kinda funny.

Liam came off a bit too strong in my opinion. The relationship between the MC and the him also just seemed a bit too rushed. I chose Austin in the end and his confession was so sweet and sincere, although I was kinda sad we didn’t get to spent as much time with him as with the other love interest.

Don’t worry, Austin is still number 1. Maybe if there is a final ultimate choice I will choose him!

Isn’t Austin the one MC worked with at Love Life? I honestly didn’t even think he was a love interest for the longest time hahaha

Hey now, the number of romantic scenes with him I could count with only one hand, but he was very dreamy!

Mmmmk, but Liam arranged fireworks and got me jewelry, so…

I had to pay gems just to get Austin to help me get to the engagement party… If he was truly in love with me, he would have done all that for free…

Side note: I think I’ve spent the most gems on Love Life than any other story. Wow.

Before I begin, this episode recap is dedicated to both me still walking after two tests today as well as the recent upload of The K*ss List. This one is especially for Episode: please focus on creating harmless stories like this one. And please Listen! And now let’s go to Sin City!

Random fact: Isabelle grew up in Chicago. Really, I don’t know, this is cliche, but it is the cliche Episode should wade itself in: Rom-com/drama stuff, not much more college/high school for a while please and thank you/