Lots of updates on both the Portal and the app today, so keep reading to check out the cool features we’re highlighting below.

NEW IN THE APP: Introducing the Device Guide!

The guides represent the average dimensions of phones and tablets.

To turn on the guides, use the Guide Box helper on the left.

For tablet users, use the Zoom Fit helper on the left to zoom out and expand the view to cover phones. 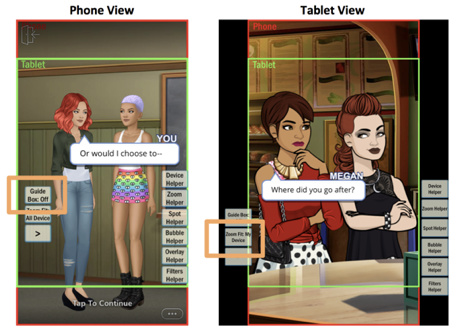 If you remember the automated character creator from this forum post, you’ll also remember that if you had a typo, you had to use the Skip option and fix it manually in script.

This week, we’re introducing the in-line character name corrector to make it easier for you to fix your mistakes.

Note that the dropdown will only include the characters you’ve already created, so if you made a typo for a new character, you’ll still want to use the “Skip” option.

We’re also excited to let you know that we got the tech to work with Classic! While it primarily works with the stock actors, you should now be able to also create Classic characters on the fly while writing your story. 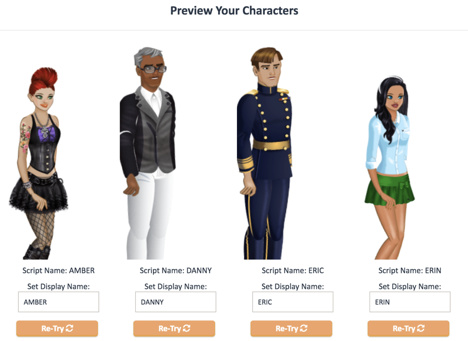 Over the next few weeks, we’ll start to look through the feedback that we received from our beta testers. We’ll then look into what’s possible to do quickly, what will take more time, and what’s also not possible given the changes we’ve made to our tech.

Because we made a pretty significant tech change to support the feature, we’re going to continue our slow rollout so that it goes smoothly for both readers and writers.

Stay tuned for more on this in upcoming updates!

As always, we’re excited to get these released to you and would love to hear your thoughts below

I LOVE THE NEW UPDATE

Amazing update! Thank you guys for working so hard to make writing easier!

Awesome! The phone and tablet previewer was much needed!!

i’m so so in love w the coming updates! thank you to everyone on the team for listening to our suggestions; i know that the character generator has been requested by quite a few. it’s going to make creating background characters so much easier (and faster!) now. i went on about more speech bubble styles sometime back, so i’m excited to see it as well!

Thank you so much for this!

Thanks for this! I’m so glad you were able to make it work for Classic and I love the new device guides, I know they’ll be a lot of use to me.

I love this new update, but I have a question: when are you going to give us information on the new in-app update with the feeds and do you know when it comes out for everyone?

Awesome work, guys! Its beneficial for all style preferences. Happy to know that Equality is still there in our world, virtually and physically, and CLASSIC style isn’t being discriminated against INK or LIMELIGHT…

I wasn’t even aware that the difference between tablet and phone were that big, I’ve always only used the spechbubble guide
As soon as the features out I’m going to have to check through my stories…

Question - for Episode team or anyone who knows - have we gotten an answer about the combining of all styles magic trick yet? Will it be removed or can we use it without risks?

Thanks for this update! Glad that the device helper has been upgraded

Will the zoom issues be addressed too?

EDIT: just had a look at the updated Device Helper on my iPad. Unlike the image you posted, when I change zoom fit to “My Device” it doesn’t adjust the zone properly. https://imgur.com/a/Fshgbpt

ugHH, I just love how Episode looks at our suggestions & impliments them.

It feels like we have a large part in running the app itself.

I love the new update!!!

The Zoom Fit feature is fantastic. I used to have multiple directing blunders when I directed on my tablet. Now this is solved!
I’m also happy about the upcoming speechbubble styles but I hope the size won’t change too much. Like many other authors, I place most speechbubbles manually and it would be a bummer to move them again. Luckily, my stories aren’t that long, but it terrifies me to think about authors who have 50+ chapters in a story

We’re slowly rolling the Social Feed feature out over the next few weeks and will post about it when its out to more people - stay tuned!

Thank you for all the cool updates, and especially for getting the character generator to work in Classic.

I still don’t have the new update of the new speech bubble and other new features on episode?!!!