Hey, my name is SarcasticGenie.
Basically this thread is to promote my new story called Secrets which can be found in the Mystery section

; there is character customisation for the MC and choices are extremely important to the story so some pathways will be locked (or unlocked) along the way. I would be really grateful if you could read it - if Mystery/Thriller is your thing - and constructive feedback to improve is always welcome.

The wait is finally over; Season 2 Episode 1 has been released. New characters, new love interests, new suspects… Remember: everyone has a secret. Who do you trust? (MULTIPLE ENDINGS)

Watch it now on Episode Interactive!!!

Description: When there is a murder at your college, you decide to try to get to the bottom of the mystery gaining an eye witness the police don’t have: the victim. (CC) 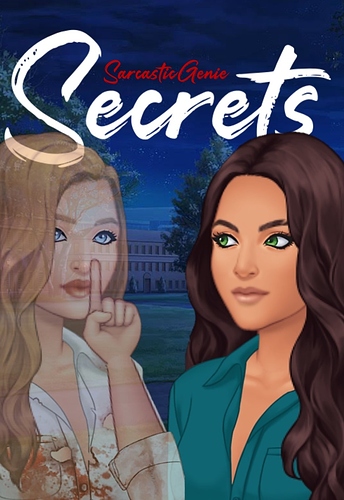 Episode 7 has now been released! Watch the new episode now to find out what will happen and continue your story.

Out of curiosity, I have created this poll to figure out which roads people who have read the story have taken:

Episode 8 has now been released!

Episode 9 is now out!

Sorry for the delay in updating; Episode 10 is out now!

The Final Episode of Secrets is coming soon: I’m only waiting on the approval of a few overlays for this last episode before I publish it which, hopefully, will happen any day now. Keep a close eye on the forums to know when it is finally published. Enjoy!

Final Episode has now been released!

Thank you so much, I’m glad that you enjoyed it. I’m currently planning the story for a second season right now as well as writing a new thriller/mystery which is Escape the Room inspired.

Nearly at 7000 reads! I am so grateful for everyone who has read it!

Wow, 11000 reads! I can’t express how amazed I am, thank you to all those who have read my story. If you have any feedback for me, just let me know!

To celebrate reaching 18000 reads, I would like to announce the confirmation of Season 2 of Secrets!

Three months later, you return to College hoping for everything to go back to normal, but normal isn’t in your vocabulary. With new characters making their appearances, the College starts to feel a whole lot bigger with even darker secrets.

Remember: Everyone has a secret… What’s yours?

Season 2 Episode 2 is finally out!

Sorry for the delay in it being published; I was on an exchange in Canada and I had had an extremely busy three weeks with coursework, and then COVID-19 happened and borders were being shut down so I had to fly back home as quickly as possible.

On a happier note, Secrets has reached 54k reads!!!

I am so happy right now!

Heyyy! I wanted to tell you that I can’t find the story “SECRETS” or “SECRETS 2” on the episode app, is something wrong with the app or something?

There was a problem with links, profiles and searches; I don’t know if it has been properly fixed. Try searching Sarcastic Genie in the search bar and it should come up then.

Okay thank you so much! Btw I read secrets 1 and it was so good! Great job!