Opinions on my characters

(Their whole personality so far is that they are friends for circumstance and social status- except aspera who thinks it’s real.)

Open to personality suggestions for Nori and Marina 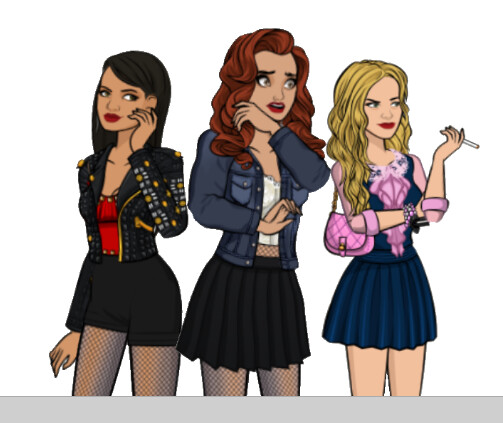 The plot is basically- Aspera and her groupies got to the top through stepping on the bones of students they hurt beyond repairable damage… when aspera starts to see the ghosts looming closer throughout the school she begins to let loose hints that arise suspicion… will she be able to surive when the ghosts are seemingly are after revenge and her cronies having plotted to get rid of her before she leaks their guilty involvement?

i feel like it’s easier to write characters when the personalities are extremely different, that way they seem like actual people.

maybe marina can resemble a bad girl regina george, minus the

nori seems like she’d be a scary smart, you know? dangerously intelligent, and closed off just enough for people to wonder. idk, your choice💛

Hmm yeah… Nori would probably be the one who plots to go after aspera and marina is more so headcannonly Ditzy and jelous… like OMG WHY DOESNT HE LIKE ME… HE SHOULD BE WITH ME… basically a walking talking taylor swift “you belong with me” character.

lmao, yeah💀 but you know how writers often create characters who have some obsession with book BECAUSE the writers themselves enjoy books? aspera seems like she’d have the quirky, nosy attitude. in the best way, of course🤭

Yeah she’s like paranoid etc cause she was once the new girl… then her “friends” told her the way to stop getting bullied was to bully others to the point where yeetings happened… and yeah… so she is popular off the bones of students she made yeet. so paranoid but like once was timid and shy… now kinda outlandish and paranoid.