I need help with an overlay to follow along with another instead of popping up afterwards.

That works, but then it takes away the part when the overlay comes up from the bottom, do u know how to get it to still do that?

What do you mean?
For example from my script:
&overlay RUNNING MASCARA opacity 0 in 1

This part means that before that command above ends the next things(below) happen.

All that worked, but I still couldn’t get it to come from the bottom and the other overlays to come up with it, if u can’t figure it out it’s fine but this is what I have. 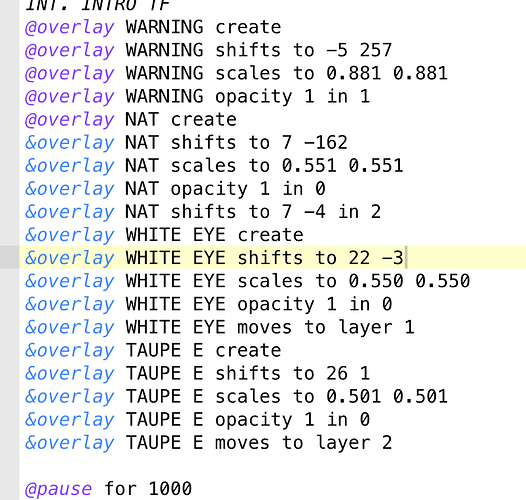 I still can’t get this perfect, but thank you for ur help✨

I’m assuming you want all overlays to move (i’m not on the portal rn so i cant test it but i can draw up a rough sketch here):

I was trying to get it to go in this order:
Warning
Her pop up with the eye overlay parts to follow
Then I was would add her to look up while the warnings pop up.
But I couldn’t get the white part of the eye and the pupil to go along with the face, and now the portal and the app are showing me 2 different things