hiya! so i wanted a overlay to appear OFF-SCREEN, but it keeps appearing on screen, can anyone help? also, i wanted to overlay to be in my characters hair (Its a flower) and stay in her hair and follow her as she walks into a room.

if you can help, thanks so much !

If you want it to appear off-screen, put it in a zone that you aren’t currently showing. So if your scene is happening in Zone 2, you need to put the overlay in Zone 1 or 3. Another option is to turn the opacity to 0 so it is invisible, and then putting it to 1 when you want it to appear.

You will need to have your overlay move accordingly, such as:

Here is a screenshot from one of my scripts that might help, where I did something very similar:

So I had the character and a limb overlay set up in zone 1, and was showing zone 2 on screen. I had her stand in a corresponding position, and placed the limb overlay where I wanted it. Then I had her walk into the shot in 2, and had the overlay shift in the same amount of time so everything stays together.

So I had the character and a limb overlay set up in zone 1, and was showing zone 2 on screen. I had her stand in a corresponding position, and placed the limb overlay where I wanted it. Then I had her walk into the shot in 2, and had the overlay shift in the same amount of time so everything stays together.

ohhhhh okay i think that i sorta understand it now

so how do i know what coordinates i want it to shift too? sorry if that question doesn’t make since

The same way I do in that screenshot! Place your character in their starting position, and then place the flower in her hair. Copy both the character’s position and the flower’s position into your script. Then, have your character walk to their ending position, and place the flower in her hair again. Copy both of these positions into your script, and put a matching timestamp on them (so if you want her to walk to her ending position in 2 seconds, you’ll say @CHARACTER1 walks to spot 0.573 43 317 in zone 2 in 2, and your flower will have to match the same time like &overlay FLOWER shifts to 56 287 in zone 2 in 2).

Does that kind of make sense? It’s a little hard to explain, but if you’re still confused and have Instagram I can send you a video that’ll make it easier!

Place your character in their starting position, and then place the flower in her hair.

wait wait wait, how do i put the flower in her hair when she’s off screen? or would i put the character in a different zone? her starting position would be off screen, since she’s entering a room

Do you have instagram? I’ll send you a video, it’ll be easier to explain!

no i can’t watch it rn :(( but you could give me the account name and i could search through there posts to find it on my computer! its complicated, but theres a website that has instagrams posts and you can download them, and my school doesn’t have it blocked on my computer like it has instagram blocked. sorry if that doesn’t make since- but i just need there instagram @ :))

So if your scene is taking place in zone 2, put the character in zone 1 to start and place the flower in her hair.

okay! how do i put her in a different zone? sorry if i’m being annoying with all of the questions

so it starts with her in zone 1, then she moves to zone 2 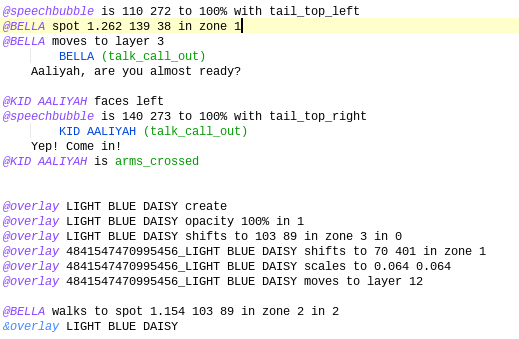 No worries! Are you using spot directing or just basic directing (ie. CHARACTER stands screen center)? You will have to use spot directing to put her in a different zone, so you see in my screenshot a couple posts back how I have the character standing at a specific coordinate in a zone? Like this:

When you’re using spot directing, the coordinate box will automatically fill out the zone as well. Son in your case, if you have her on screen, all you have to do is:

Copy this box into the script:

would you copy the whole stage? or just copy? or does it not make a difference?

Perfect! You’re halfway there! Now you need to create and the flower overlay at the same time you have Bella in Zone 1 (the highlighted line in your screenshot). Then you will have her do the walk line you have at the bottom of the script, and before that you will do:

And place it at the correct coordinates in zone 2.

what command would i use to create the flower overlay? just wanna make sure i get it right!

Like this, so just move those create lines up to the top! 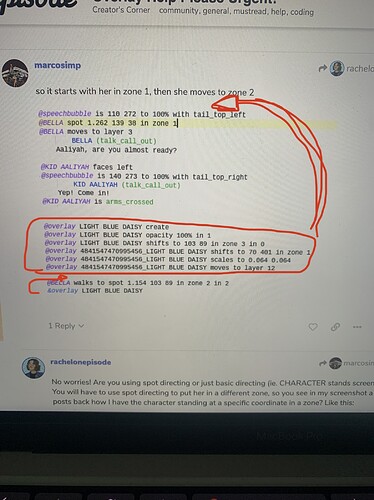 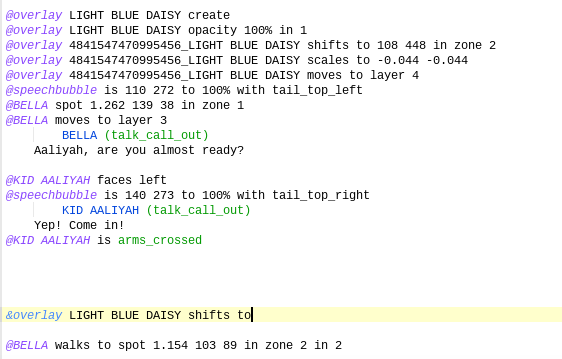 okay this is what i have so far!! is it right?

Yes, that’s perfect! Now you only have one small thing left to do!

You have Bella walking to that spot in zone 2, all you need to do is drag the daisy overlay to the right spot in her hair, and put the coordinates into the highlighted line. So it’ll end up being something like:

The bolded numbers are the only thing you will need to change.

Oh, also I just saw - you need to fix this line 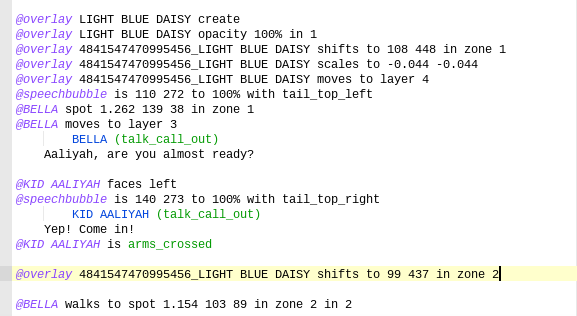