Overlay is not created

Did you try to put next to the background – with LOTTERYTV

and bit of your time

I need help with an overlay. It says it’s not created. Here’s the code:

I know I spelled it correctly. Any idea what’s going on? Thanks.

Saying it’s not in the stage view, like an error message?

There’s nothing wrong with the code you have pasted in, is there anything nearby that could be affecting it? Or maybe something with the upload?

The spelling must be right anyway, if it wasn’t right, the error would look like this: 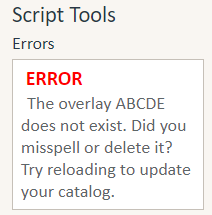 It looks alright to me as well…maybe it has something to do with layers if your using any other overlays in this scene?

I see your edit, there’s still nothing wrong with your code.

Is it an error message? Or just you can’t see the overlay? Maybe one is underneath the other? Both are at a position that they should be onscreen.