I coding a scene where I am placing overlays in both zone 1 and zone 3, but when I put @overlay OVERLAY spot in zone 3- it shifts my overlays over and puts them in the fourth zone (black screen/ background only has 3 zones)
What do I do?

Make sure that the position numbers you use aren’t too far to the right.
I’m not really sure how to articulate that without being confusing but here’s a sketch of what I mean: 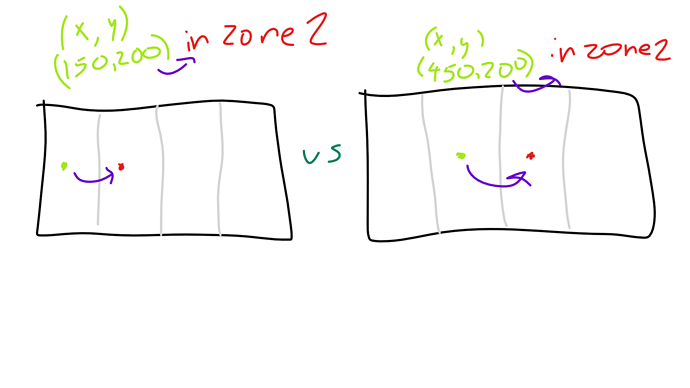 Ty! I think I get what you’re saying.

Hey, I’m having trouble and I was wondering if you knew what to do…
The scene won’t continue past a certain point (or go to another scene)

when you place the overlay in preview you always have to write the zone IN WHICH you were placing it.

Like if you are in preview in zone 2 and move the ovelray offscreeen to the right so it is physicly in zone 3 you still have to write to the coordinates in script “in zone 2” because this is the place from which you placed it and from which the script calcultes the coordinates you have coppied.

Simply if you place overlay in zone 2 (or any other) you will then if you pan then to another zone and copy again the coordinates of the same overlay…thay will be different from the previouse because now they will be related to the new zone you moved to…so if you for any reazon copy the coordinates from the new zone again to your script you have to change the “in zone” despite of the fact that the overlay itself havent moved.

Hi I know it is a matter of preferences but I would recommend you to not write such a long line of coding with AND if you can use & simply because if you make mistypo it is so much harder to find it is such a long line.

The problem I see here is that you spotted first the people using & and on the next line you use @ to walk them.

everything with & will happen simultaneously with @ UNDER it …that means you in same moment place the character on one spot and make him walk to another which might create glitch.

use @ when you first spot them instead and see if the problem was solved.

the same goes for

in this line you make two different zoom in the exact same moment.
I gues you want the other zoom happen after the first one - but than you cant use AND butt have to use THEN

Omg Ty! I really appreciate you looking through and explaining the problem- it worked!