CAN SOMEONE HELP. someone who knows what they’re doing.
I’ve been dreading this soo long.
I really did not want to make a post about this

I know a few other people who are experiencing overlay issues on the app & web previewer lately.

Your code looks fine so it should be fine. Might just be a glitch?

It’s been doing this for like 2 weeks. I thought maybe it was bad overlays but I replaced it and that’s not the issues. I have many other overlays in my script but these are the only ones that don’t show…

Lemme try it out real quick.

It’s because you put the opacity to 0 that’s why it won’t show up.

That’s not it lol

The opacity is 1 in T

This is the overlay fading away.
The code is correct.

sometimes shows on the web previewer.

Oh I think it’s because you put the & symbol so it makes both commands happen at the same time. Idk Anything about overlays so maybe I’m wrong

Your code is fine bc I tested it out.

CAN SOMEONE HELP. someone who knows what they’re doing.

I don’t mean to sound like a bitch but if you don’t know anything about overlays why are you commenting? I need someone who can actually help me.

Your code is fine bc I tested it out.

Yeah… It works on the portal but not in the app.
Could be because i’m using it in a if/else statement? Could that be a problem?
@kw.episode 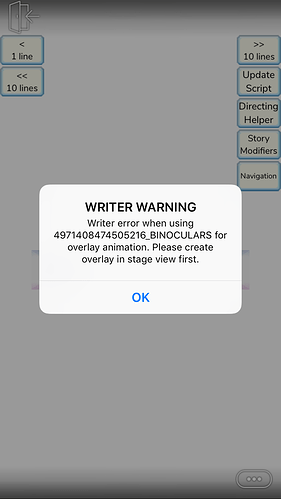 I have to keep on tinkering around with the coding.

It does have both. I’m so confused as to why this isn’t working.

Actually They might have a point since you put & on everyone of the commands that might be the problem. If that ain’t It the create command doesn’t always work, At least not for me so I stopped using it and put the overlay in the background line instead.

I tried that already and I am still having the same issue…
My code is correct. The problem is the overlay is not showing in the app. but it is showing in the portal.
Plus if I use @'s my overlays will look glitchy because I have transitions after it