I have a split phone call scene and i have the coding but when I preview it, the background doesn’t pop up in my script. can anyone help? thanks! 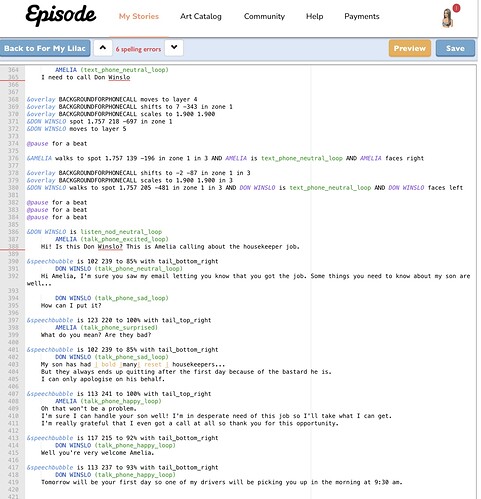 Did you by any chance use the create command for the overlay?

someone I met coded it for me so im not sure

Did you create the overlay in the middle of a scene?

Oh, okay. Can you share a ss of higher up in your script? Create commands need an opacity command to make overlays visible.

so do i take a ss from the beginning of my script?

Just the beginning of your scene. (: Hopefully anyways baha.

that’s the beginning of my split phone call scene

The beginning of that background scene?

where it says “Amelia (text_phone_neutral_loop) i need to call don winslo”

What we mean is scenes as far as the script/code is concerned. “Scenes” are typically separated by the portal using backgrounds.

I hope that makes sense. But you could search to see if you have the create command there using ctrl + f and typing:
@overlay BACKGROUNDFORPHONECALL create

on line 368, was that the first time you coded in the overlay, since I do not see a create command, or do you have it next to the background?

This is my whole script

Ah, okay. There doesn’t appear to be any create command nor was the it added to the background.

Before the rest of the overlay commands. If it doesn’t work than the x y coordinates (in the shifting commands) themselves may be incorrect.

Yeah, you never added the overlay to your script, try to do what @schittwriter said above!

to which part of the script