Please halp me find this story!

Hey guys! I made this account because of how bad i want to find this story lmao (hence my user name). I read it a couple years back. Its in the INK artstyle. It starts (i think) with mc (female) on holiday and she catches her boyf cheating they are both rich and she goes to like this rich people school. She falls in love with the poor dude that i assume is there on art scholarship or sports one idk lol. Anyway I’m pretty sure his name is Landon and he works in a pizza place to support his little brother and i think his mom might have had a drinking issue maybe? I can’t remember. Any help finding this would be really appreciated thank you!! <3

Do you know if it’s an episode official story or community?

Ok, I’ll search, do you remember any words in the title? Or genre

Im really sorry i can’t remember anything about the title. i’m guessing it was romance or comedy genre i used to read from those genres all the time.

No worries! I’ll tell you if I find it

Could it be Matched, MC Name: Jade Lyons?

I don’t think that’s it sorry.I don’t recognise anything about it i’ll definitely give it a read though!

Thank you so much for helping! I’ve been looking for like an hour now

By chance, could this be what he looked like if you remember? 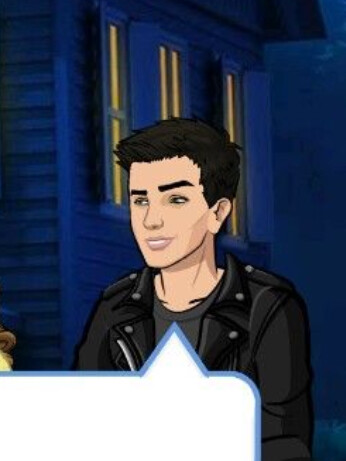 Is that the Landon wilder dude? I’ve looked through that story and i don’t think its that one bcs i think i was able to customise the dude in the story i read and i gave him the curly like medusa hair idk how to spell it. But you can customise later in the story if that is Landon wilder so maybe i did it then?

I specifically remember like the other character calling him London and mc corrects them and she just did it the exact way i remember.

In the story that screenshot is from (I imagine is matched mc name and features are the same) there was cc for some guy named Caden at the start so maybe you could cc Landon later?

So it could be it?

Yes i think so. I have no idea what the other story i’m thinking of is but oh well i found the one with my dude Landon in it so yay

thank you for helping me!!

This sounds a lot like the story Crushing Steel by Talu. It’s really good. The guys name is Lincoln and the girl’s is Rosalinda. Lincoln’s mother has a few drinking issues like you said and he also gets a job to support his family like you mentioned. The INK version is called “I Broke My Rules For You”. But it looks like you already found a story xD