Please someone help me. Duplicate troubles

I’m starting my first story and Im allowing readers to customize their character. But I plan on including flashback scenes but I wanna make younger versions of the MC and also other characters in my story.I have read Dara Amaries duplicate template and instructions but they still aren’t clear to me. Why hasn’t anyone done a video tutorial about this already?? I just need it explained a little better since I’m a beginner. It’s very frustrating.

Yes I know that. That is the whole point of my post. I’m saying I don’t know how. I am asking for help on how to.

As the main character gets customized, there are additional lines of code that change the dupe to match the main. Since you are using a young character and not a mirror reflection, you may not want certain things to change. Dupes that show a younger version of the character will have identical hair, eye, and skin color, but not always the same face shape, nose shape, hairstyle, eyebrow shape, or lip color, especially if the main is wearing makeup.
In this case, you may want to preset the dupe with a rounder face shape, shorter less styled hair, a natural lip color, and a small nose, then remove these customization options from the template so that the dupe does not look fully adult when they are supposed to be young.
If you want to use the template directly from Dara’s site, just make a dupe character and use its script name where her template says “DUPLICATE.”

Will I have to include dupes in scenes in order to customize them? I don’t know how to explain what I mean. Like do they need to be off to the side during the customization of the MC? I’m so lost. Do you have Instagram or something? Do you think you can take pics and show me? I need a visual representation to help me understand better. Like a visual example

You do not have to put the dupe in the scene to customize it. I do have Insta but i’m not very good at using it, so i’ll see what I can do.

okay my insta is miktastic_ so send me a message whenever you get the chance if you want. thank you for the help

Hello, I hope this helps 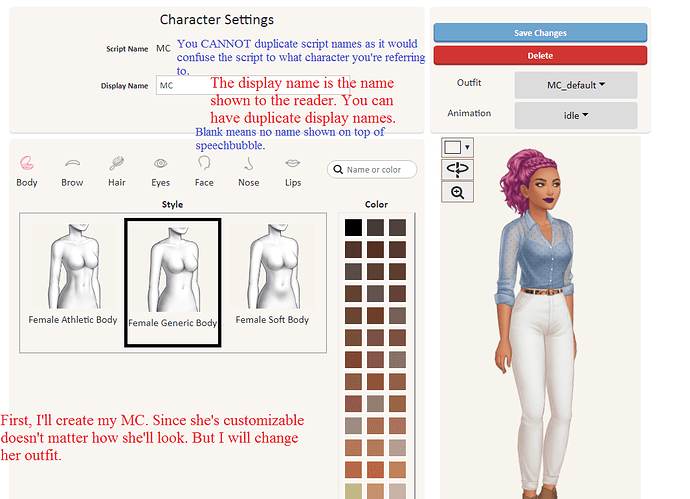 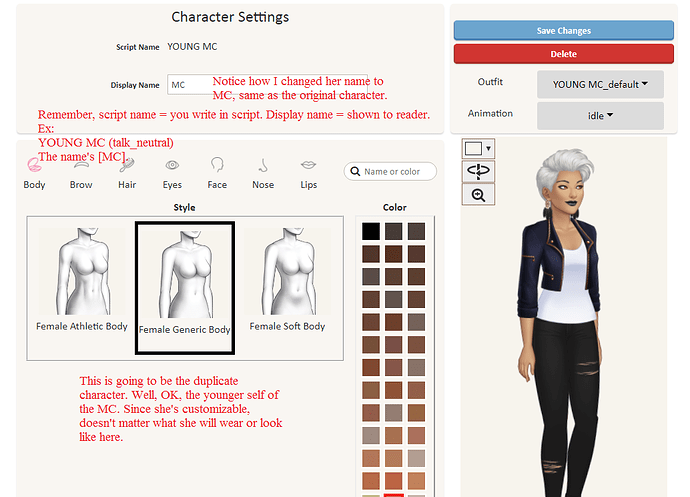 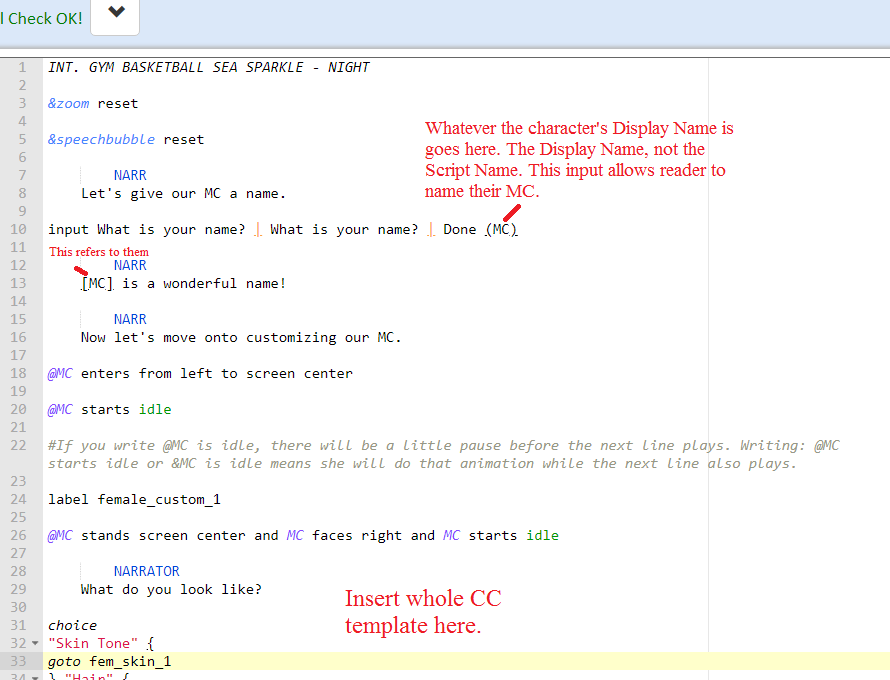 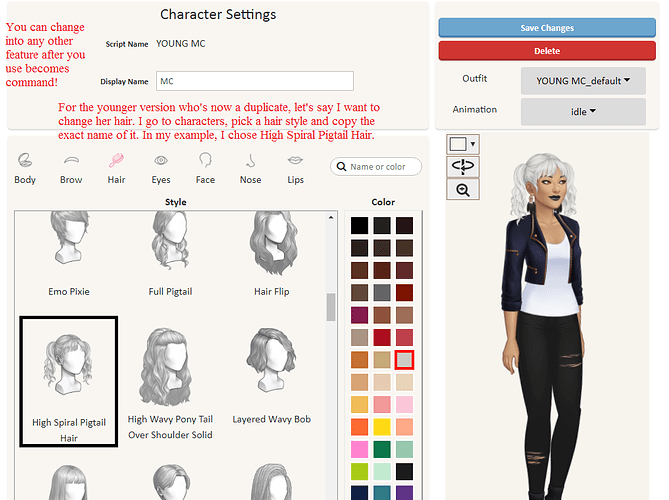 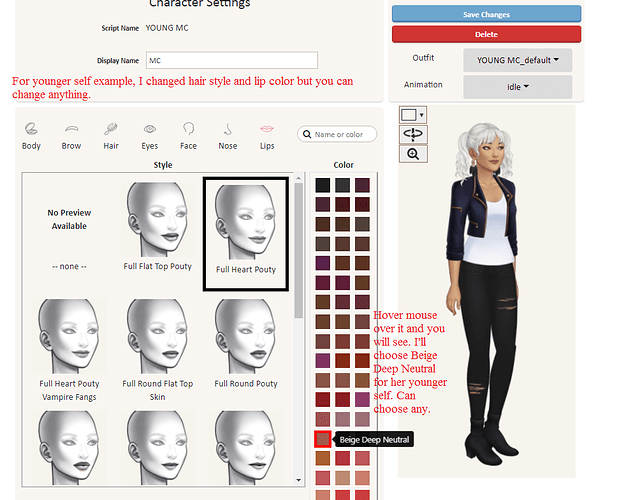 Threads to check out:
HOW TO: Customize Characters

HOW TO: Use the previews and unpreviews directing command 💜 🌙

Eh it kinda helps. I’ll just keep looking over it and hope it clicks. Thank you!

Wat template did you use? Do I need to use it more than once? Will the choices be remembered automatically?

Wat template did you use?

You can find CC templates here:

Check out Dara Amarie's many script templates for Episode Interactive authors to use in their stories. These templates include character customization for both Limelight and INK, dressing games, hairstyle and lipstick changes, and many more.

I used this one:

How to put it in your story: 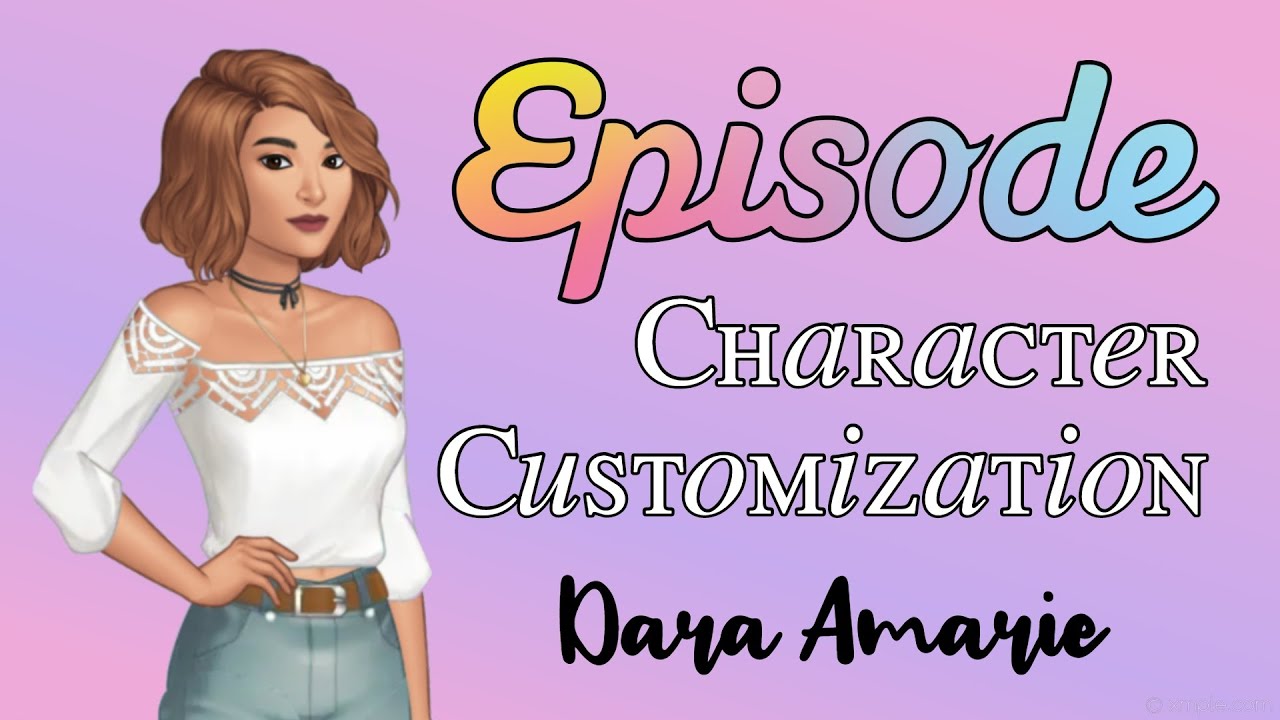 No, you don’t need to use it more than once.

Will the choices be remembered automatically?

Whatever you customize into carries over for all episodes. You won’t see this on web previewer but when testing on the app, you will see this. So if you change your hair into Long Side Shave, you will have that hair for every episode until the reader changes it if you give them another cc option (they can also leave changing the hair if they like it) or if you decide to change it in your script by typing up a command like: @CHARACTER changes hair into…bla bla bla… (you’d replace bla bla bla with a hairstyle that exists in characters and CHARACTER’s name would be yours)

I will allow readers to customize in the very first episode of my story. Will i need to add the duplicate template when I do that??

Will i need to add the duplicate template when I do that??

No, you don’t need a template for the duplicate character. Just for the main. After you finish customizing the main character and select finish, that’s when you will make the duplicate become the MC and change certain features. So just 1 template required. But if you want to customize more than 1 character (like father or friend), then you’ll have to paste another template (do NOT paste the same exact one within your episode due to duplicate label issue-duplicate labels aren’t allowed in an episode). 🖤 HOW TO: Labels and Gotos 🖤

So you can paste this template in episode 1 of your story only once:

You can paste it in episode 2 of your story only once:

Basically, you can paste it only once in each episode of your story. You can’t paste it, for example, twice, in one episode.

You’ll find templates to customize more than 1 person here within an episode:

Six Limelight customization templates for both female and male. Each template has different labels so you can add more than one template in a single episode.

Feel free to customize the MC and duplicate however you’d like and change their outfits into whatever you desire when you first create the characters (so you’re not at the putting it all in the script part yet) (you don’t even need to use the names MC and YOUNG MC, can use literally anything. Having the same display name-name shown on top of speech bubble to the reader-is nice).

But if you’re still stuck:

And I’ll whip up a template for you, to which you’d just post in your story

wat can I message you on?