I’m working on making PNG animations for animals. It mostly started out as a test to see if it could even work, good news, it can but my coding isn’t the best since it isn’t my strong suit. My main thing is creating the animations themselves but truth be told I can be a little lazy on that as well. Right now I have the basic animations for a deer. They are pretty ok, though the most recent one I have done is by far the best. The Deer Running Animation. 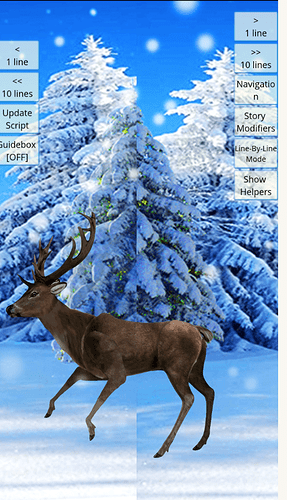 I have EtherealWitch to thank for the coding help.

I of course, want to share my png folder for animal animations eventually but I still have some to create and I also want to make sure the code is a solid as it can be for each one before I start giving it out. The Deer will be the first one I want to finish, and then the Wolf since they both have to do with my story.

**
Basically creating the next frame, just before you delete the first frame and adding the 1.0 for pauses on frames. Of course, I have to add the code in to create and size everything before I start the animation.
So if you’re interested in trying to make transparent PNG animations like this, this is the way to do it. Of course, you have to speed everything up for EPISODE. So it would actually be 0.01 if you wanted it to play at normal speed in the actual app. Also, the last frame after you make it opacity 0, copy and paste it to the beginning of the animation code and make it opacity 1 so it won’t just go blank after the last frame disappears. I hope that makes sense.

Anyway, I just wanted to share my progress on this project for anyone who is interested and ask for some coding tips on how to streamline wordy coding and make it faster, also to share my code for making this in the first place. I looked for something like this but couldn’t find anything.

Thank you for sharing it, it’s actually pretty nice since I can’t relate someone who do this. Now, if people is interested they can come directly to you.

This is actually great o: Thank you so much for this