Hey! So I made a poll on the New Ideas thread so people could tell me if they want to be tagged in a new rp or if they need old information from when it was on the old forums, but I can’t see WHO is voting! I edited the polls to make the results public, but it’s not working! Is there any way I can find out who’s voting what now that 5 minutes has passed since the polls have been posted? I asked people to PM me their votes, but so far no one is doing it (not that I blame them tho). I don’t want to remake the polls because people who already voted won’t go back and check the old post to recast their votes. Can any staff members help or am I just stuck? If I make a post on the thread that ISN’T proposing a new idea I think it will be deleted so I need some help! 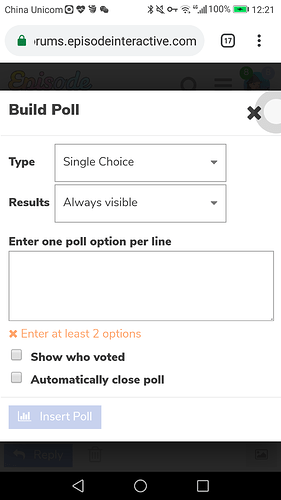 I know, but I can’t remake the poll or else everyone’s votes will be reset and they’ll have to revote. You can’t edit polls after 5 minutes of posting either. Trust me, I’ve tried

I’m having the same problem with not knowing the peoples usernames too! It’s so frustrating!