Has someone get this message when they try to preview? 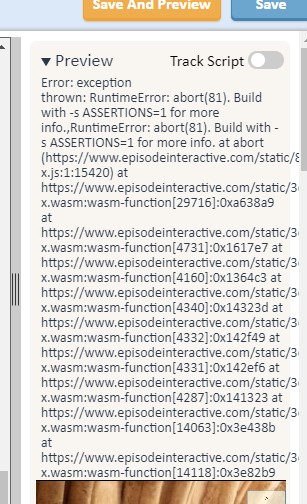 SSAEDW307×504 66.1 KB
I already refreshed the page, and restarted my computer but somehow it still appears!
The weird thing is that it only appears on a concrete story, I tried previewing other stories I’m working on and they work fine
9 Likes
lanafrazer_episode July 27, 2020, 12:05pm #2

If you preview the others a bunch of times it will do it to them, too. The portal is literally riddled with bugs at this point- helpers arent working, random preview errors, people constantly having to refresh their browser etc. Its super annoying but the only thing we can do is send support tickets and wait.

Just yesterday, I was app testing the opening scene to episode 5 that has no music & there was random music playing, and even when I had animations listed with the dialogue- my character did nothing on screen. It’s very annoying and very demotivating.

This happened to me today too, I closed the tab and opened it once again and it worked fine. Try that.

Have you tried checking your character’s names? Sometimes, when it’s misspelled, it shows an error and freezes my script

Thank you all! At the end it worked but I had to hit preview from line 100 lines up, somehow that concrete scene dosen’t load unless I preview it from the last scene…

Happened the same thing to me! I had the animations on the script but somehow after publishing some readers and myself experienced that the characters stood idle…

It’s so frustrating, and I totally agree that this is very demotivating. I started doing the spot directing and such on my phone, but it’s not nearly as convenient as the preview on the portal. I’m doing a lot of overlay work on my story, and my god is it hell to have to refresh the portal every five minutes (doubt it’d even last that long).

My phone for whatever reason zooms in super close and when I try to zoom out, it just snaps back to the script- otherwise I would do this, too.

I feel like they should stop trying to add new stuff to the portal until they FIX the things they already have.

Agreed. I love the horse update, don’t get me wrong, but I think they should hold off on stuff like that until they fix all the bugs.

I haven’t had an issue with the app preview yet, but I have something similar happening to me with overlays (the one thing I need to work) on the portal where I try to move them around and all of a sudden they start shrinking and growing, and when they finally stay on move around without scaling, they just snap back to their original location.

I really just want this all to be fixed. It’s so exhausting.

I love the horses, and really can’t wait for more skin options (there are so many colors and types of horses around the world.) but I’d much rather be able to work for a whole hour without refreshing my page 50 times. Just sayin, Episode!

They need to get their priorities straight

On a plus side to my day, I got a message saying they’d reviewed and approved my story- I wasn’t aware that it was being reviewed but cool

I think they’re trying to do too much at one time and that’s a problem because things fall through the cracks. I mean really- I think the app can go 2 months without an update in order for them to fix the thing people are using to MAKE stories for the app. I wouldn’t complain.

I wouldn’t be upset either. Don’t get me wrong, I love the weekly updates, but I’d rather have a usable portal tbh

also congrats on the approving

I’m all for the weekly art releases ( I still have wishes that need granting!

) but I meant the actual app. Every time I check my play store for app updates, there’s a new episode app update. I would forego having the app updated for them to update/fix the portal issues.

Ohhhh that makes way more sense haha. Yeah I could go a while without the app being updated for our portal to be fixed. I don’t usually update my app very often, and it seems like the only purpose for the updates is “bug fixes” and more featured stories

Exactly “bug fixes” - we’d rather have the Portal’s bugs fixed.

I don’t update the app often either

I do it like once every other month- if that.