So i was just coding my script and i wanted to see how it looked so when i tried to preview it the char would freeze so i refreshed it still did the same thing i even exited out and went back in and its doing the same thing.

Can you make a screen shot of your script? 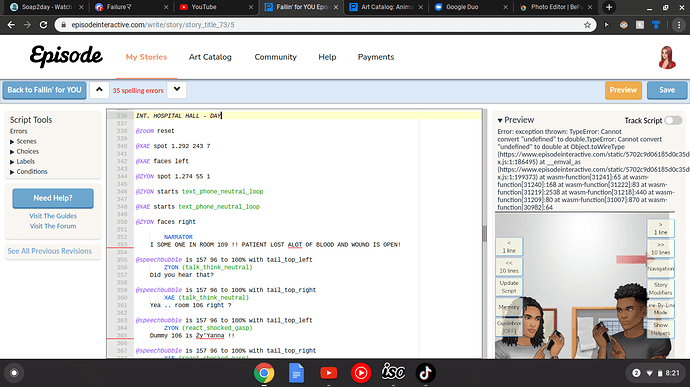 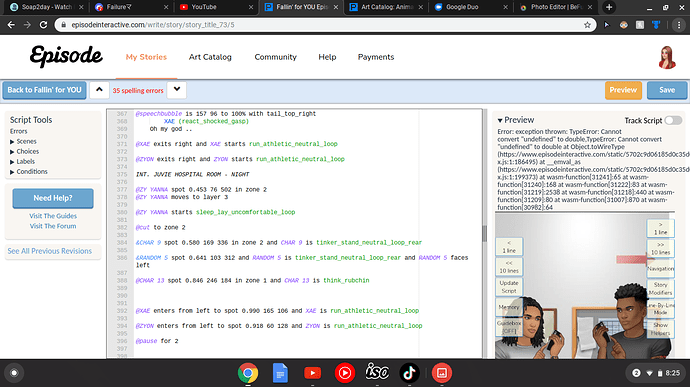 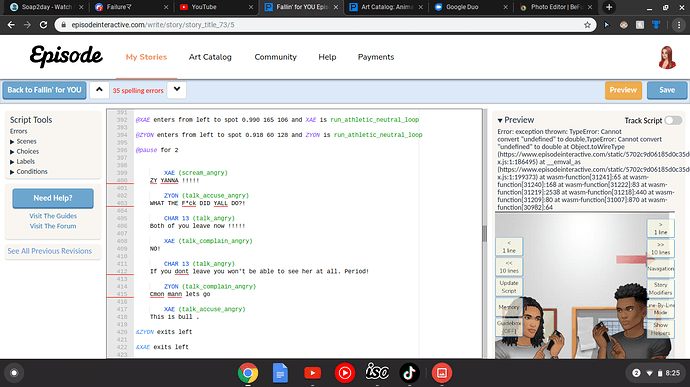 There’s an error above the previewer. If refreshing doesn’t fix it it may be a bug on the portal. You can try opening it in another browser

like Mozilla or something. Sometimes it just acts up

Could be something to do with having spaces in character names? I don’t know. Someone like @Dara.Amarie would know.

but i named it

Can you send your script?

Hey, I’m actually going through the same problem right now with the preview not working. I’d first suggest that you look at this on Episode and try each of these steps:

This error means that your browser is out of memory and unable to render the story preview.  Here are some basic browser troubleshooting steps to help resolve this issue: Clear your web browsers c...

If these don’t work then you’ll have to send a support ticket to Episode to fix this! This isn’t a script error, it’s one in the portal, like a glitch. Wish you luck!

its telling me i cant embed media in this post

You can copy paste it here. You don’t need your whole script, just the part giving you the issue.

alr
(here it says the error tho its nothing)
choice
GEMS:17"Vanilla PJs" {

the error says: You forgot to name your premium choice! Please add (choiceName) after the choice command.

You forgot to name your premium choice! Please add (choiceName) after the choice command.

It’s because you need to name the choice. For example:

And then you write the choices.