Oh boy, once again there is Racism in the Episode community particularly attacking an Episode Editor; Joliebear101 on instagram.

Just saw this from Episode Authors that I like, some have spoken out about these peculiar episode users if they have an episode account, which they do, on their disgusting behavior and heartless actions. I think some have deactivated their accounts but there is on peculiar episode editor that is so keen on attacking Joliebear in which is Skyedraws.

This is a very, VERY serious problem in the episode community that we are having. Even there are “fans” that are defending the disgusting and heartless actions of their favorite editors. For their disgusting actions against someone of color.

We had this issue before with AussiePotatoes and MissMJ. Now just for MIssMJ’s part if you heard or didn’t hear, she posted on her instagram that talked about Reverse Racism saying that white people can be judged by their skin color, which is true, and that’s actual racism. Basically MissMJ defended racist and denied the oppression of people of color. Which was pretty harsh in its statement that she posted on her instagram and I’m not trying to twist her words around, I don’t know if she’s against racism or not.

Just for once we had the racism problem before and now this again… These young punks think its so cool to call those of color the N-word.

Continuing, so Skye she also had this cute video she shared in her DM’s threatening she knows the FBI and telling them to not mess with her, she had a phone in front of a mirror while telling them that. How cute, that she is just trying to scare them by threatening to call the FBI…. If it was me I would be challenging her, I would be challenging her to call the FBI so they could track me down, arrest me, interrogate me just for me to telling you to stop bullying Joliebear. Skye is just adding fuel to her fire that she made.

Again, if it was me that she was dealing with I would’ve pulled out a Bianca Del Rio on her and that’ll shut her up.

I do have the receipts on Skye’s appalling behavior. 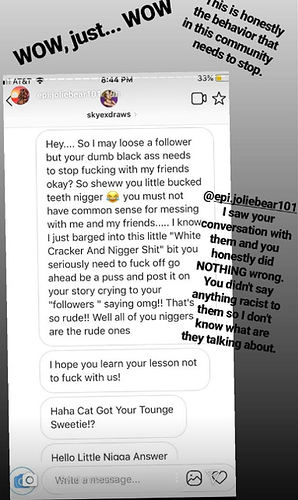 I saw that and thank you for telling people about the situation. That girl has done this many times. At this point, I think she is a troll. A RACIST TROLL!

I agree that by now she’s being a racist troll trying to look for attention.

Closed topic as to make sure this doesn’t head in an off topic direction. @PersephoneAlmana.Epi we will be sending you a PM regarding this soon.