Read for Read | My First Story

I’m always looking for new stories to read, and I just published my first ever story on Episode. If you would like to read my story and want a read in return, just reply to this and I’d be more than happy to read your story!

Title: A Heartbeat Away

Episodes: Just the first three episodes are published so far

Description: After narrowly escaping death, Sapphire is the first human to get fully functional robotic organs. This leads her to some special abilities, special companions, and special love.

Hiya! I’ll do a read for read with you?

Title- Hidden Behind Lies…
Authors Name- Chy.Dillon
Genre- Action/Romance…
Description- What happens when your dad has a past and it finally catches up to you? Kept in the dark all your life, the truth slowly unravels…Is it what you expect?

I created my first Story and published the first 3 episodes a few days ago. That’s why I would love to make R4R, too.
@instagram -> maylaugh_episode
Story: Trouble Twins
Author: May Laugh
Genre: Romance (I think a little Comedy, too.)
Style: INK

I would Love to do R4R with @SparkySue and @shewrites.episode

I have to do another 2 storys, but after that i would love to read yours

I’ll be happy for reading. Thanks

Title: Caught In Love
Author: TeahWalker323
CC limited, some choices
Details: You’re a cop and just caught a murder. He’s a murder who is bad for your own good. What happens when you both get caught in love?
3 Chapters
Published 09-17-18
Small Cover: 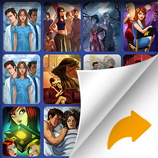 The Best Stories Are Worth Sharing: Caught In Love

Yeah that’s fine I have a few storyies to read and then i will get started on yours, I’ll dm you when im done, or dm me when your done

I know the struggle

Description:
What would you do if a galactic being gives you the power to go back in time, and change the outcome of events that were out of your control?

@SparkySue Hi there… I publish new story here… with arts inside… would you R4R with me and leave comment to improve more…I would like to know which favorite part by screenshots the scene. I want continue next episode if I get feed back and Improve it. Screen shot the fav scene so I can know what I must focus on. Thank you.

My story is here:

Author: R.es.story
Genre: Romantic Comedy
Style: Ink
Description: Maxwell is 3rd year, everyone knows him already. He likes hurt girls that the girl who tries enticing on him. Jade hates the guy who hurt girls the most and trying revenge on him.
Episodes: 4 (Ongoing)
Instagram: @r.es_story

Hi guys! Not sure if it’s alright but this is my entry for the thriller contest. Do tell me what you think about it. It’s my first time entering a contest.

but it is my second time directing and publishing a story. Here’s the link below. Thank you!

There’s limited to no romance involved in the story because that’s the norm. So I decided to write about something different from the rest. It’s very diversified not only because I used the 3 character types but I’ve gotten inspiration from the lores, myths and legends from the various countries in the Asian region as well as my own hometown. It involves different races and ethnicities, different nationalities and different languages(Eg: Sanskrit, Sumerian and Babylonian) thus the unique character namings. It’s fiction (The Malapinchian Tribe) but based on reality inspired by various sources. Just like Transylvania(Dracula), Romania in Europe is famous for its thriller and horror stories, allow me to introduce to you thriller and horror stories from Asia: Thailand(The Ring), Malaysia(Lady in White) and more. #TheBestOfAsia

My story: Thriller: Tribe of Malapinchi
Author: Jannah Jackson
Genre: Thriller
Story style: All the 3 episode characters types: LIMELIGHT, INK & ORIGINAL
Description: Toss into a land of the sun, magic, lies and dark secrets. Can you make sense of the havoc you were tossed into and save everyone before it’s too late? CharacterCustomization
Episodes: 3 (more coming soon)
Instagram: @jannahjackson
Link: http://episodeinteractive.com/s/5909308359180288

I will definitely read your story!

Episode lets you LIVE your stories. One choice YOU make can change everything! The world’s largest home of visual stories where YOU choose your path. Or, become a creator and write your own! <3 Wouldn’t it be amazing if YOU were a character in your…

Hello, we could do a read for read if you want ?

But first: For a guaranteed feedback fill in the form

It's a simple way for me to read your story. And have a proper list so that I won't forget anybody. Let's support each other as authors. PS: You won't get any feedback immediately the same day. (It depends on the length of my list of stories to...

Here is the description of my story :

Description : A bad boy Prince with a lot of ego and a womanizer, gets lost in the middle of the Jungle and meets a fierce African Princess called Maya. Will he handle the change of environment ?

Hi. I’m the girl from the other forum that said I would check out your story. I just finished Reading Chapter 3 and It’s amazing!

Title: Better on my Own
Author: Joanna Banana
Genre: Romance/Action
Style: Ink
Story description: Camila has never needed anyone’s help. She’s a one woman army. But what happens when she is forced to accept the help of a mysterious guy to accomplish her greatest mission yet?
Link: http://episodeinteractive.com/s/6447079579582464
Small Cover:

I will read your story!

This story is based in a Brazilian urban legend and a mix of my favorite horror movies. Hope you enjoy it!

Story title : STAY AWAY FROM THE MIRROR
Author : Débora Pilatos
Genre : Thiller/Romance
How many Episodes : 3 out. (new chapters every week!)
Style : INK
Story description : Debbie’s life changes completely when her ex, Flinn, puts her in a dangerous game. Will she and your friends survive this?

I love the theme of this story! It‘s so fresh and something different. Your english is well-written, the zoom is perfect and I really love the little covers/backgrounds like the beating hearts. Really Nice

Hello! I read the first three chapters of your story. If you could read my three chapters and post screenshots, that’s be much appreciated! Thank you!

May’s personality is very bold and I love her character! Very good story, I enjoyed it! Here are some of my favorite scenes:

Hi would you like to do a read for read? Here’s my story:

Brief Description: Love at first sight. Denver and Cassandra are soul mates, and they know it. Their love is so pure, raw, and real. But all good things must come to an end.
Warning, this story is very chick flick-y, nicholas sparks-y. So if you don’t like that kind of stuff, read it anyways

The Best Stories Are Worth Sharing: Dying Love

Hey @SparkySue ! Do you want to do a R4R /w screenshots?

Description: Childhood friends reunited after 10 years. Sierra &amp; Peter reunite after an unexpected meeting. How can they mend their friendship to account for the missing years they were apart?

This story is based on a true story, my life actually.

Hello! I just finished reading the first three chapters of your story, and here are some screenshots.

Please read my three chapters and post screenshots once finished. Thank you!