Hello everyone!
I’m reopening my hunt for a co-writer! I had four originally but sadly a two of them had to forfeit their role due to a number of reasons! This also means that I will be reconsidering all of the other people that applied the first round.
My story is called Artemis Rising! The plot will be put down below!

If you are interested then please fill in the form linked below!
If you end up filling in the form please comment and let me know so that I can read it asap, thank you! 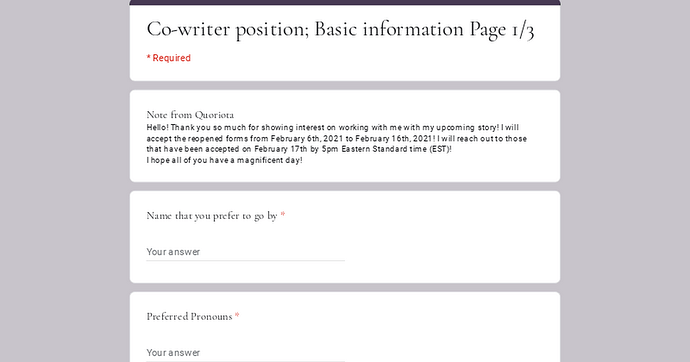 I mentioned this in the form but in case you don’t read it, I’ll be accepting the applications until February 16th! I’ll take a day to consider you all individually (meaning that I will look over your strengths and weaknesses when writing as well as a few other factors) and then I will contact all of those that are accepted on February 17th by 5pm Eastern Standard Time
Thanks all!
Stay good people

Yes you are! sorry I just lost two other co-writers! I should have made that clear, my apologies!
@catgirlepi is a co-writer as well!