i fixed some thing in my script including the dialogue and the characters position, but its not updating it. its still the same as the old one someone please help me. i refreshed and everything!
Screenshot (3)|690x465

Try again. When you do it again, make sure to copy and paste it if you’re on PC. If you’re on mobile, take a picture.

i did and its still not doing it

You have both characters entering from left and going to screen center.

is thats whats causing it?

and i want both of them to come from the left

But they’re both at screen center which is why one of them is on top of the other.

so i can make changes

What do you mean your script is updating?

if you see in the screenshot the word from the animation and the script one isn’t the same words, and i noticed that so i fixed it to the proper grammar and also the position i want but its not changing

it keeps popping up the old grammar and animation

As for the animation, try refreshing the page.

what do u mean “accented characters”? and i have been i did it multiple times

The line over the last “a” in “papa”. That’s an accent. They don’t show up in the script.

ok i switch it and it still hasnt changed. Maybe its the software bug or something 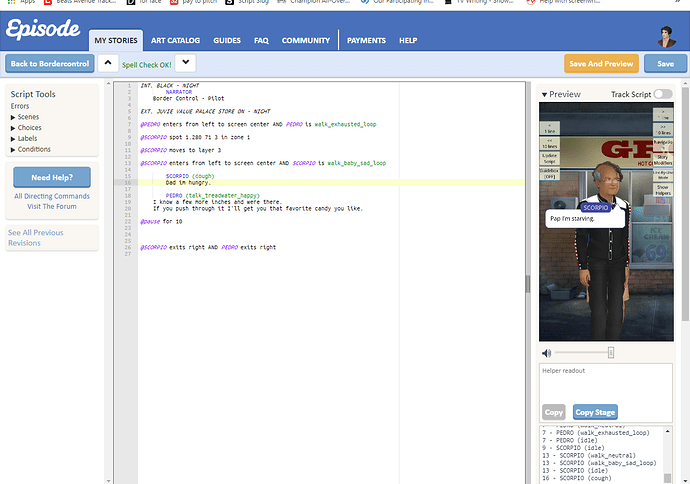 Are you clicking on “update script” or “Save and preview”?

ok i fixed it i think