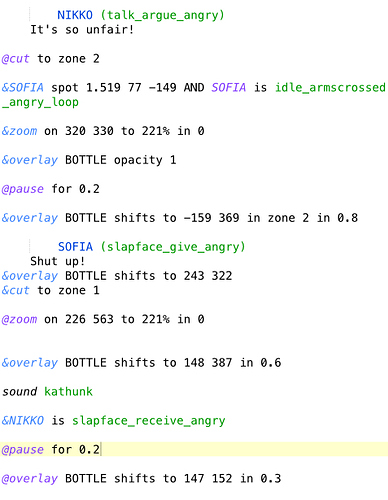 So this is the bit in my script that is messing up.

Basically, the character SOFIA is throwing a bottle at the character NIKKO, and so I put the bottle in her hand but at opacity 0, and when the scene came, I made it opacity 1 and shifted it so it looks like she’s throwing it. Then it cuts to the first zone to show the bottle hitting the guy, and I shifted it so it hits his face then drops. But for some reason, when it drops, it automatically goes back to his face like this: 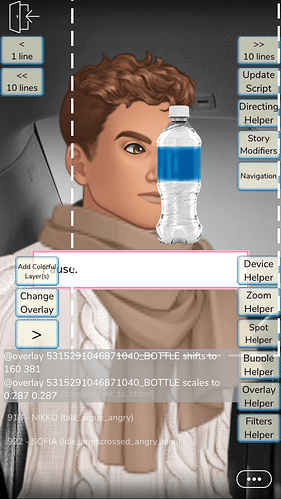 Even though the last spot area for the bottle overlay is at the bottom of the screen where it dropped. Why is it going back to his face?

I honestly don’t know why it does this, but maybe you can change its opacity at 0 after it falls

I think you just have to change & to @ in this line:

I don’t really know how to explain, but in you script the overlay does the two shifting almost at the same time, but if you use @ for both lines, the second animation will happen after the first one.

i love it when someone throw something at a characters face.

Some of the overlay placing might be off because I didn’t use the same bottle overlay as yours and I also wasn’t sure for the spotting of Nikko, so I just put screen center.

This one helped! Thank you

@Sydney_H can you close this please?