Should I put “LGBT” in the description?

My story is about a romance between two women, but it’s actual focus is the fantasy story. It just so happens that the MC is gay and that she ends up with a woman. While it is important to her as a character, the story is actually a three-part story more focussed on the origins of hate towards magical people (in the same universe as my original story, The Queen of Freaks, and is supposed to explain why Faeries are being captured).

Do you think it’s important to add “LGBT” in the story description? Would it really offend people to read a story about a gay woman who tries to save faeries AND gets the girl if I don’t? Or do you think I should be appealing to that side of the story because it would increase the diversity? Or that it’s fine not to mention that it’s an LGBT story?

I mean, I guess why people do put “LGBT” in the description and why they’d want that… but at the same time, I don’t have to put “straight” in the description and I think that’s overplaying the significance of the LGBT relationship in the story. It’s like… a side plot. Would people be upset by that if I advertised it as an LGBT story? I mean, it is called “When I’m Gone” and does focus on the letters the two send each other during the war, but their main focus is saving their Faerie friends. They just also get together at that time.

So, should I put “LGBT” in the description? I’d love your feedback!

I don’t see any problem in doing so.
People like myself do search for LGBT stories so having it in the tags/description will help people that don’t want to read a straight MC story

As long as her sexuality isn’t the only thing that defines her it should be fine!

Yeah, I think my main problem is that it’s misleading… It might make people think the whole story is about the romance if I put emphasis on the romance in the description. Actually, she’s a badass private investigator who just really wants to save her friends, understand magic, come back from the war alive… and then get the girl.

I’m not going to cop out and just suggest she’s gay. She’s very much in love with her friend, Daria, but it’s just not that important in the grand scheme of things. The most important thing is that she, along with her friends and Daria, are the leaders of an underground pro-Faerie group.

it isn’t misleading (in my opinion) it’s just a story that happens to have a gay MC. I’ve read other stories that promotes LGBT but isn’t necessarily focused on the romance

You don’t think so? I was really worried that it would look like I was trying to tap into the LGBT audience and make them read my story even though it’s not that romantic. I was afraid that it would seem a little manipulative to play on the market because LGBT romances where the characters are interesting is very much in need/demand.

Plus, even as a bisexual girl myself, I’d be lying if I said that I wasn’t also a little worried that it might turn straight people off my story.

Yeah I felt the same for my story as well because my MC is bisexual and have seen other people get negative fanmail because a character is gay or whatever.
People can assume what they want and the best you can do is explain yourself. If they’re still stubborn about it, it’s their problem not yours.

Thanks for that! It’s true that people will always have an issue. I just hope that, since it’s not CC or reader insert, people will realise that there’s no reason why Meera’s sexuality needs to match their own.

I think you should. I’m straight but I’ve heard LGBT readers look for LGBT in descriptions/titles etc. and a romance is a romance even if the romance is in a side plot 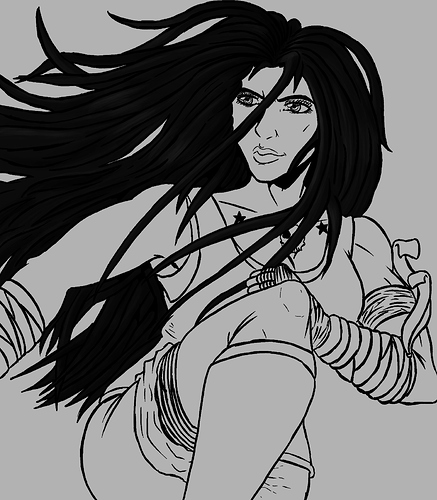 He’s working on the colouring now, I believe

Thank you! Do you think a story description would turn you off if it said LGBT as a straight person? Do you think it makes it sound like it’s reserved for the LGBT community?

I can’t really vote because I agree with you that it doesn’t necessary and yeah, we don’t put “straight” in the description.
On the other hand, I agree with @Atreus, since some people are actually looking for LGBT stories, and this would help them to find it more easily. No one will think your story is all about romance unless if you put it in romance genre. This would just (probably) boost up your reads. As a straight female myself, I would still read it if the description was intriguing.

That looks so dope, do you have an insta so I can keep updated on when the story comes out?

Thank you so much! I was worried that maybe a description would alienate straight people, too! But this really helps

Honestly I think it will definitely turn some people off your story, especially homophobes, but since the story genre doesn’t seem to be romance then I think a lot of people won’t mind since it’s not the main focus anyways. They’re probably not looking to read a romance if they’re reading your story, so the MC’s sexual orientation would matter less to readers. Personally I have read LGBT romance stories and I’m straight. I really don’t mind as long as it’s a good story.

I completely agree with @Annieways. I am heterosexual but I definitely would not mind reading a story with an LGBT couple.
It would indeed be a lot easier for people who are actually looking for LGBT stories to find it if you put it in the description but since its main focus isn’t the romance, I get why it might not be necessary.
But yes, go for it - it’s nice to know whether you like reading LGBT stories or not since you can either go ahead and read it or simply skip it, depending on what you like.
(That being said, I don’t think people should skip a story - whose main focus is not actually about the romance - just because it’s LGBT.)

I think you make an excellent point about the straight thing by the way.!

Honestly, if the genre isn’t listed as romance, people should figure out that it’s not romance. We need more LGBTQ+ stories that aren’t primarily romance because we exist outside of our relationships.

As for whether or not you should, I recommend it if you want to cut down on the number of shocked homophobes in your fanmail. If you don’t mind that risk, then it isn’t really necessary; their reactions are their fault anyway. I’ve read plenty of fantasy stories with poorly-integrated heterosexual and pregnancy (because of course I can’t even pretend a character is trans for once) subplots and didn’t harass the author over them, so…
I do recommend putting LGBT and/or LGBTQ+ in the tags section regardless because it makes it easier for people who are looking for representation to find your story.

That aside, putting LGBT in the tags is an extra search term, always good. And it’s not misrepresentation because she’s well. Gay

Maybe it’s not a bad thing to turn the homophobes off! I’m glad so many people don’t mind reading LGBT stories!