Hello everyone! I was bored and have nothing better to do with my life, So I welcome you all to:

You can drop your stories down below and I will read and review them! I can give you a detailed review of your story including “constructive criticism” Constructive criticism is a helpful way of giving feedback to people and should not be confused with straight up criticism or hate! You can use these reviews to improve your story!

~A couple rules I decided to add:

Please specify in your form if your story is Published or Unpublished!

Don’t worry, I’ll get to your story eventually!

If this flops, it didn’t exist ok? did. not. exist.

This is so nice of you to do, Simran

Thanks for this Simran

Story Title: i-Humanoids
Author’s Name (Your Name): Hazel J
Story Synopsis (Short Summary/Description): With the increasing cases of missing people in the metropolis, you can trust no one. But can you trust a mysterious non-entity whom for all the while you thought is a human?
Sensitive Topics Warning (Any topics that you have included in your story that might be sensitive to the reader): -
Story Link: http://episodeinteractive.com/s/5273039194488832
Password: simreadsstories

Thank you sm for this!

If you decide to review my story, I love constructive criticism!

Story Title: Stranded
Author’s Name; Amiree
Story Synopsis: Story Title:
Author’s Name (Your Name):
Story Synopsis: You’re offered an opportunity of a lifetime. You leave London only for the plane to crash. You are now stranded on an island and learn that the crash may have been planned. 1LI CC
Sensitive Topics Warning: Death?
Story Link: http://episodeinteractive.com/s/6074594463645696
Password: simreadsstories

I’ll add you to the waiting list! Thank YOU for requesting!

Woah your story sounds so interesting!

Ofc I’ll review your story and get back to you! Thank you for requesting!

Thank you for this thread.

Title: Detective Wars
Author name: Episodetiger
Sensitive Topics Warning:
(At the beginning of the story all the warnings get shown before you can read the story.) 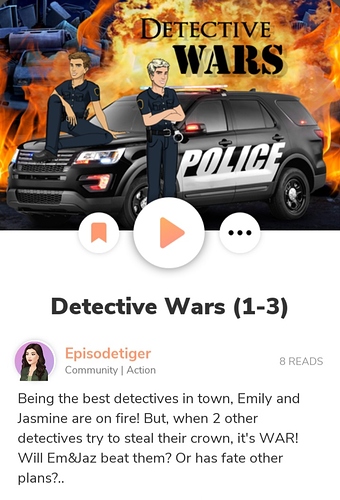 Hey! I would love a review.

Story Title: For Dear Life (LL)
Author’s Name (Your Name): Medusa
Story Synopsis (Short Summary/Description): An old flame or your ghost husband? One wants to save you, one wants to claim your life. But who can you really trust?
Sensitive Topics Warning (Any topics that you have included in your story that might be sensitive to the reader): Death, murder, assault, abuse, toxic relationships.
Story Link: http://episodeinteractive.com/s/5319692842106880
Password: simreadsstories

Thank you for the opportunity!! Here’s my story!

Story title: Quicksand
Author’s name: repujaytion
Story synopsis:
All you wanted was one last night of fun with your friends. But when a missing persons report turns up… Well… let’s just say you should’ve stayed home that night.

The Best Stories Are Worth Sharing: Quicksand

@Episodetiger @medusa.jett @repujaytion Thank you so much for requesting! I will definitely add you to the waiting list!

Thank you so much for Requesting!

Thank you so much for doing this! I’d love to get your honest review!

Story Title: Sealed with a Kiss
Author’s Name (Your Name): Tsukino
Story Synopsis (Short Summary/Description): Working as a criminal lawyer, Aria is more than happy with her normal life. What‘ll happen when she gets thrown into a world full of glitz and glamour overnight? LL,CC,Art,Choices
Sensitive Topics Warning (Any topics that you have included in your story that might be sensitive to the reader): No.
Story Link: http://episodeinteractive.com/s/4896674215559168
Password: simreadsstories

I’ll add you to the waiting list! Thank you so much for requesting!