Some of ya'll need to get stuff straight

i think it was their business since it was stolen?? lol logic please.

If you use someone else’s creation and make an edit directly from it. make sure you ask permission first or that there’s something that says you can. If someone else asked you to edit someone else’s work, again make sure you have their permission (at least ask for clarity from the person who asked you) and clear up what kind of crediting parties involved expect. I’m not really sure where the intellectual property lies and how that affects a derivative work’s license, but if you use Episode assets, Episode technically has complete legal ownership of your work so really if you use Episode assets, you don’t really own your work. The work you did is a derivative of someone else’s derivative work of Episode’s material (I’m assuming this involved Episode assets), so I’m pretty sure Episode still owns it regardless, but it seems reasonable to if not legally, at least morally from one artist to another, respect their work and their boundaries.

I tried to read up the terms of service and understand this situation but I’m sleepy and it’s (metaphorically) going in one ear and out the other so maybe I mixed things up and I’m wrong. Do tell if that’s the case.

Editing other people’s artwork and then claiming it as your own is stealing? Honestly editing someone else’s artwork without their permission is stealinv whether you credit them or not. Someone has put their own time and effort into that artwork and it’s disrespectful to edit it at all without express permission.

if you apologized, good for you. it’s their mistake if they are still trying to argue.

that implied she gave credit but I guess she lied ?

Actually, it wasn’t your place to make an edit with the drawing because it wasn’t yours. (At least from what I can interpret of your post.)
IMO it’s stealing (even if credit is given) if you don’t have permission from the artist to reproduce or edit the artwork.

First off it wasn’t a drawing, it was characters that she’s crying about, like no one could make characters that look similar and third of all it’s none of anyone else business. If she had a problemand wanted to confront me about CHARACTERS she could’ve pmed me instead of starting drama here. It’s not here edit nor her work. The cover she’s talking about is 100% mine, she’s just mad because the characters look the same as her but my story is probably way different then hers so I did not steal anything. And this post that I made wasn’t for her , I thought that her friend was talking about something else which I already resolved.

I have no idea what image you’re actually talking about.

And if anyone can make characters like that, then why didn’t you do it yourself? And if it’s none of our business, then why are you posting it publicly?

No I wasn’t starting problems publicly , I was just stating that it’s not okay to start drama here and I did not mention anyone. And second I already told you that I thought her friend was talking about something else and third of all I didn’t steal her characters. I made them myself. I had no idea she made her characters like that.

But I gave credit to the person that did it

Then why did you give her credit if you didn’t use her characters? lol I’m confused.

Omg here we go again, I thought her friend was talking about something entirely different. Not this situation. But then apparently it’s about characters that look the same…This post was not aimed at her because i didn’t know her friend was blaming me for stealing something from this girl.

I can’t really comment on any specific situation as I’m not informed, but in general, I believe that if you edit someone else’s artwork without their permission, that’s stealing. Especially since the forums are such a close-knit and accessible community of artists, it really shouldn’t be a problem asking for permission if you really wanted to.

I understand your view on stealing and stuff and I respect that and I agree too , but I didn’t steal her characters. Yeah she’s crying about how my cover which I made myself has characters that are “hers” when stories continually have characters that look the same, but I can assure you I did not steal nobody’s edits. And if I wanted to use something someone else made. I would’ve asked because it’s better than just using it. And replying to this bs is a waste of time. I shouldn’t care because I didn’t do what I was accused for and there’s really no proof I stole character like tell me that’s the funniest thing you heard. But anyways just mute this topic and do what u love this is just petty things that other people want to start. Have fun doing what you do and if any one wants to accuse you of things just be the bigger person and try to be humble. Wish you and everyone luck on your lives. I just want to be happy and do the right thing and I want you guys to do the same : )

And replying to this bs is a waste of time.

But anyways just mute this topic and do what u love this is just petty things that other people want to start.

Can we just think who made this thread? Oh, it was you.

I didn’t do what I was accused for and there’s really no proof I stole character like tell me that’s the funniest thing you heard.

If we’re talking about the same image here, it’s not about you stealing the character looks, it’s about you stealing the characters pose which somebody else worked hard on. This person has proof they made it and you put their characters in the position they made and just added it to your cover. It doesn’t matter if somebody requested you to put the character pose thing on, you should’ve asked quite simply for permission before sticking it on a cover and then claiming the whole cover as your own.

If you have such big guts, I dare you to post the time lapse. Norris (the girl on the cover) might be an average girl so her looks can be the same, but Atlas? Nah, he can’t be the same. I spent minutes to make him look mid twenties. He can’t be the same. Ffs even the clothing is the same. Not to mention that little emptiness in my edit is still there. 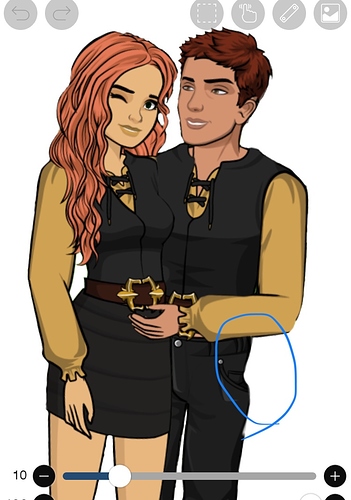 Topic closed due to violation of Forum General Rules. If there is a discussion that needs to happen between you and another user, please take it to a private message. Thanks!