Someone help me please and thank you

How do you add weather effect when your character is in the shower and not and not the entire sence of when she enters the bathroom?

OK, here’s an example I gave someone on another thread and I hope it helps: EXT. BACKGROUND - DAY with effect HARD RAIN NARR Bla bla bla, whole scene goes here. EXT. BACKGROUND - DAY NARR Scene goes here where it’s not raining anymore. (So, basically, to turn off a weather effect, you will need to re-write your background without the effect on it, and re-place all of your characters into the scene).-a quote of mine We can’t layer weather effects unfortunately like we can with overlays bu…

weather effect is on the whole screen.

If you want to see rain atc only on part of the background - you cant use whether effect, this is done with overlays

OK. So for one of my scenes (check below) I really wanted to put the rain effect, but needed it to be layered. Weather effects currently can’t be layered (at least that’s the info I got from my search). Problem solved this way:

then you must build the scene again in the moment you want it to rain since wether effect starts with setting the background - so you have to set it again even its the same scene/background.

Where do i get a rain overlay from??

She is saying that in order to clear the rain effect, you have to build the scene again because the effect will last as long as it’s still the same one.

You can find rain overlays online on free sites here’s one I found.

Although if you use a rain overlay, it will fall all at once (as an overlay does) so in order to make the fall look better you might want to download it twice so when one falls the other can be at the top and fall after it.

There is already a rain effect that can be found on the right side of the portal with all the drop downs. So you don’t actually need an overlay. 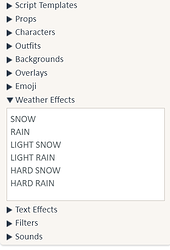 And that is why she coded it like this:

INT. BACKGROUND
#resetting the scene to remove the rain effect

How did you get it to download it png form?

I just searched “rain png transparent” and downloaded it from one of the websites that showed up.