Sound not playing in app previewer? 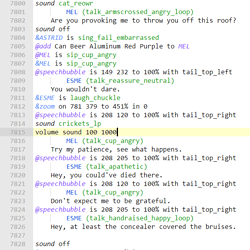 image640×640 29.2 KB
I don’t know whether how many people (or if there’s anyone at all) who experiences the same issue, but some of the audios in sound format does not respond in the app previewer, especially with the audio shown here, crickets_lp.

I already added a sound off command on top of the audio mentioned, in the web previewer it’s completely fine but in the app it just won’t respond no matter what.
Even worse, teh problem persisted after I thought that issue was fixed (it started playing last night but today… Again).

That happened with one of my unpublished stories idk how to fix that either.

As for the other published stories, do all the audios play?

Yes, I sometimes get the same glitch when I’ve been trying some music and sounds effects for a while. I always thought it was a bug so, it has nothing to do with the coding…

I hope they solve it soon…

I do face sound issues on my app previewer too and it doesn’t occur to me anymore after adding a sound off command in every sound I used.

I’d test your code and the sound crickets_lp did play on my app previewer. So it’s definitely not that audio issue.

Not too sure what’s the problem for you but you can try to add a volume command for the cat_reowr too like how you added it at line 7815. Do restart the progress, and play it through again.

Yeah, that’s what drove me off the edge before. I tried updating the script, resetting story progress, none works. It only shoots me out of the app a few times until it eventually plays, then the next day it doesn’t😂

Thanks for helping anyway

Oh I see… I think you mean “published”?

I did research and I know that sound off commands before a sound command should work. Well this is the case where the app previewer didn’t seem to work for me. Hmm… I’ll see if I should update the app or something…

I was tired oop

Ah I see, no problem!