I’m building a Spanish character and I realised I know nothing about the culture. I was wondering if anyone would be able to tell me about it.

Here are some prompt questions to help:

well ik quince for girls andthe day of the dead

also most of us are taough spanish at a young age

Yes!! totally agree, I can also to add what a Quinceañera is…
A quinceañera is a celebration of a girl’s 15th birthday. It has cultural roots in Mexico and Southern Europe and is widely celebrated by girls throughout Latin America. The girl celebrating her 15th birthday is a quinceañera. they usually wear really beautiful big dresses sort of like a princess dress.

also most of us are taough spanish at a young age

and yes most of us are taught Spanish at a young age, Spanish was my first language

EDIT: I know not all Spanish cultures are like this, I’m Mexican and we have pretty wild parties with loud music, alcohol and kids running around, and they sometimes last all night long

Spanish culture is so incredibly widespread that there isn’t really one answer to any of your questions haha. One thing I’ve learned is that a lot of Spanish-speaking countries have a pretty solid party culture and celebrate more religious holidays than Americans do. Also the vast majority of Latinos (especially Spaniards) are Christian/Catholic.

It depends on the age of the person’s daily routine, some people work, study, have fun, etc.

What does a Mexican person look like, like any other person in the world, usually there are people who are very short in height, it is very rare that there are tall women, but the times when you get to see them it is something amazing. Men are tall (some) but it is rare or funny to find someone small in stature.

In parties anything is celebrated like communion, baptism, but especially quinceañeras, there will always be one especially on weekends, as people have more time to rest (not work.)
Talking about cultures, everything is celebrated, Independence Day, the day of the Virgen of Guadalupe, Día de Muertos (not Halloween), Christmas, Nochebuena, New Year, Día de Reyes, the mariachis are well known because they sing when it is your birthday, it is always with guitars, etc. And there are more traditions, everything has a meaning but it’s too long to explain, we also celebrate or drink just because, there doesn’t have to be something to celebrate.

If you want something else, like food or so, just tell me and I’ll be happy to tell you. It’s worth mentioning that I am Mexican.

Wtf, where did you get that from?

Virginity is something else here, we NEVER get to celebrate. I don’t know where you got your information about quinceañeras, but it’s a big party, and it’s the girl’s day. And yes, it takes too much money to celebrate.

Yeah I’m sorry but I’ve never heard of that ever! at least not in my family.

I’ve never heard of that either tbh .

@Catniss @Marysol.Episode @phoenix.brunet it has to do with my riligon and my family uses a sweet 15 as a reward for saving it for that long as my grandparents have certin customs

but it’s a big party, and it’s the girl’s day. And yes, it takes too much money to celebrate.

Okay, I see…
sorry I just wasn’t familiar with anything like that, nor have I heard of that

It may be like that for you, but every family is different

I won’t talk about religions or anything like that. But just because your family is like that doesn’t mean that’s the tradition.

i didnt say it was 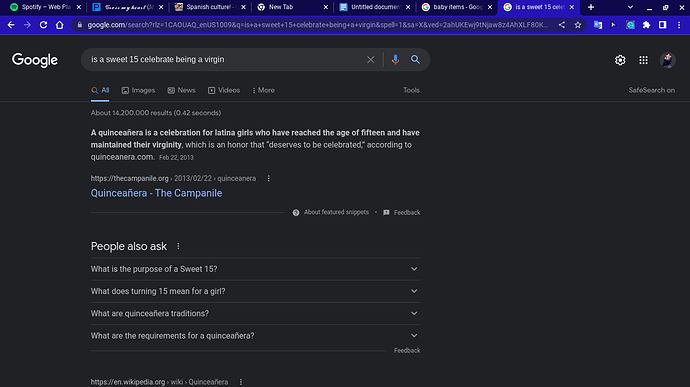 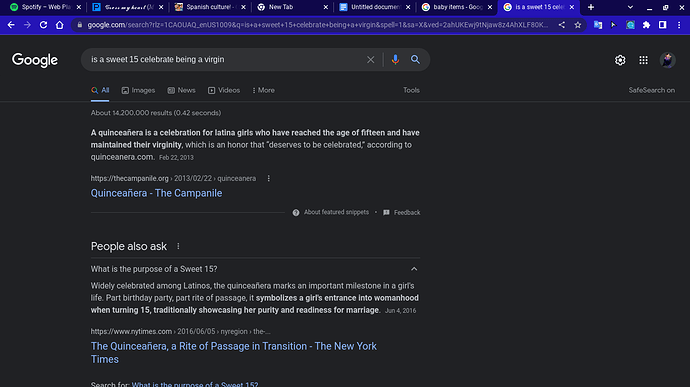 for some people it is trudition

No, it is not like that. I am saying it because I am Mexican. And that’s not tradition, it’s not even called tradition, it’s more of a celebration. I’m not saying it in a bad way but if you want to know more you could watch videos where they explain all the cultures here in Mexico.