For the past few months I’ve been working on something quite large.

Not to Hot (limelight) is sort of like dating simulator and comedy smushed together. It takes place in South Korea! I’ve worked very hard on it and now I’m left with advertising it.

This story will include art scenes I’ve done myself, here’s are examples: 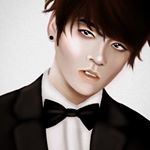 Linktree. Make your link do more.

Warning:
This story will include language, occasional sexual themes, and dark humor. If you’re sensitive to bullying or anything of the short; then this story might not be for you.

Art done by me,

A young highschool student named Dante has been bullied all his life due to his weight. After changing schools to have a new start, he wakes up one morning in a completely different body. This new body is GORGEOUS. Everytime he falls asleep he switches bodies; his old body works at night while his new body attends school. Dante thought that being attractive means his life would become significantly easier, he was dead wrong.

This story is more shifted towards comedy since at least every scene includes comedic value, references, and memes. You’re welcome

All the names are English names so you guys will have an easier time understanding them. In cases, Korean names can be translated to English ones! So just see it as that

This story will be in Dante’s point of view. However, you will be able to create your own character but they won’t show up until later on. When she does, you will be switching views from her and Dante. There will be TWO main characters.

If you have any questions you can post bellow, message me on the forums, or message me through other media platforms. You can also review my story and leave feedback.

About me: I’ve been writing on the portal for over a year. I’ve pretty much memorized all the codes and can do advanced directing! I also like the do digital art and write. I’m 18 and A GIRL. (People assume I’m a boy?) I love lasagna and cats. Also Mexican food is bomb. BTS IS LIT.

What this story will consist of:

Please check out my story. I’ve worked SO hard on it. I’m promise you it isn’t trash. Well… at least the directing and all the technical stuff is on point. I’M TRASH.

You’d be helping me achieve my dream. I know advertisements for stories can be brushed off and nobody really cares…
But this is so important to me. This isn’t like any other story. I’ve put SO MUCH TIME and EFFORT.

I have seen you around in the forums and you know what, when I get the chance I’ll check your story out!

No worries - it sounds super cool, I don’t really follow K-culture but it gives off such cool vibes

After reading all 4 current chapters I have to say that I absolutely LOVED this story!
*exactly my kind of humor
*a storyline that hasn’t been overused by thousands of authors
*wonderfully directed
*not your average boring american high school with boring standard characters like queen bee or an overrated star quarterback
*and again, exactly my kind of humor! Half of the time I was laughing so hard that I couldn’t even breathe.
At times loud and bold, partly subtle and clever, the humor in this story just killed me.
So… who ever is reading my words right now, read “Not to Hot” instead, read it now!
As for you Zaddy, I still admire your beautiful weird mind and hope you find much time and motivation to continue this masterpiece

Only sad thing? Until episode 5 comes out I’ll have to wait in boring, unfunny, sleepless misery… well… I’m sure I can survive that.

AWWWW.
THANK YOU SO MUCH.
This has to be the nicest thing anyone’s said to me

I’m glad you enjoyed it.
Actually as of now, I felt that episode 4 was too short as well so I’m extending it.
I’ll update it probably sometime today and it will have more content.
Thank you so much for the kind words

Out of curiosity what were some of the choices you made?
Did you call Nora and got the body yourself?
Choices like that

I called Nora, it’s always better to have someone help you, aaaaaand I figured having others involved could result in more fun and drama than just going in and out all by yourself, probably unnoticed.

Otherwise I’m acting as a nice/polite person 'cause I don’t think that Dante could change his personality as easy as he’s changing bodies. Still the same mind behind these razor sharp cheek bones, you know?