Ugh I’m so useless at this. I got my character to hold gun but in the next scene their still holding it, how do I get them to not hold it anymore

You’re a lifesaver haha, thank you so much!

So I give a lot of helpful tips here when you’re starting off in the episode community:

You can try your hand out at making your own. Either PowerPoint or PicsArt are good resources or you can request for a cover in Art Resources in Creator’s Corner. How to upload it:

HOW TO: Upload Cover / Background / Overlay If you’re looking for some cool fonts: Lunaa's Text Overlay Thread {OPEN} is great to check out. I have this thread here of cover creators: The A-List of Profile Pic and Cover Creators! OK, so Pixabay.com and Pexels.com are great place to get backgrounds free for commer…

Feel free to check it out <3

Is it actually possible to let the reader choose reading style like you could in “Out of time”? Or is that something that only some authors can do? And if it is possible to do that, how do I do it, are there any guides?

what do you mean by reading style?

I got an issue with fading my character. I already read Dara’s thread about it and followed every step of it but since I’m starting my scene with many other commands it confuses me af…

Here is what I got so far:

EXT. GRAVEYARD - DAY with GRAVEYARD_OVERLAY in zone 2 at layer 2

The overlay already has the right size and I want “Unknown” to be seen normally and Ariel shall be fading. Is anybody able to help me with that?

No, unfortunately not. I made it like that because it was my first try but it didn’t work and I didn’t want to delete it

But thanks for your answer anyway

Is there anyway to get this to work in a script?

I’m trying to remember a choice while allowing the choices to automatically separate into pages.

I don’t think that would work with customization cuz there’s no way to “ungain” gains, so the reader would gain the gains for every choice they press on

I tried this in my script and it worked

Hey! I just started writing my first story not too long ago, but I can’t get the transitions down. I always have a lot of things going on before the transitions fade in, so maybe I have too many commands? Here’s something copy and pasted as an example:
INT. TEEN SISTER’S BEDROOM - DAY with TEDDYBEAR with TOYPILE

Can some one tell me what I did wrong? I’ve been staring at this for like 10 minutes and I have no idea 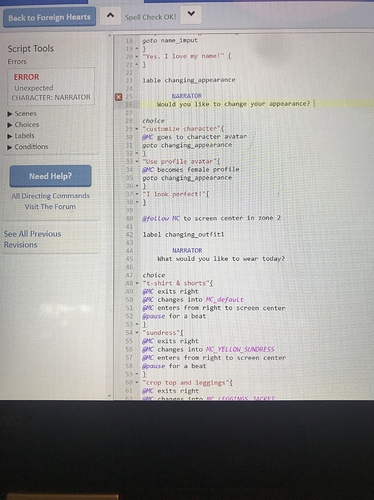 I put it into my script and it worked, maybe try re-writing it