I’ve been trying to move her to layer 2. But for some reason it refuses to cooperate.
The overlay is with the wallpaper

I’m still fairly new at this, but I believe it’s to do with the “enters from right” command that defaults the layer to layer 1 and you don’t have her switching layers until the end.

Since you’re using spot directing, here’s what I’d try (you can also add seconds if you’d like to specify after the 0, just put in # where # is the number of seconds and after the pan to zone 1 in #)

You could also just try

Thank you for helping I really appreciate it. It’s been bothering me lately. But it’s still not fixed.

I don’t know why but nothing is working.

Yeah I have trouble with layers

I feel your pain. Someone will be able to help you eventually tho

Try that. If that doesn’t work replace the @ with the & symbol.
Also, if I’m not mistaken the background needs a with or at least you should have
&overlay OVERLAYNAME create - command somewhere in your script. I could be wrong. I never used a default OL

What overlay? You didn’t put any overlay on the script, unless you’re talking about the overlay, that is included into the background. In that case, there is no way to adjust the build-in overlay of that background. No matter what layer you put, your character and other overlays will always be behind it.

Ok. So, this might actually be a “stupid” question, but I just think of it as me seeking for some advice. I’m creating my first story, Chess Wars, I’m currently on Episode Two. The only issue is, I’m worried people are going to like the title name and everything, but once they see the amateur coding they’ll leave. I’m not good at understanding things, so the forums and stuff were not that easy for me to understand. What should I do?

Chess Wars! I can’t believe it, but I also have an idea of chess-related story for Episode. Actually this story was the reason I started writing on Episode.

So I feel you.

What I did: I came up with another story, which intended to be as simple as it can, so I just can learn coding and storytelling process with it. And it worked perfectly for me. My code became better and better from chapter to chapter. You just need to write to understand more of it. And if you came up with chess story idea (so I assume you can play chess pretty well), then you will understand advanced coding very soon. So my advise is try creating something small and simple first?

Thank you! I guess it won’t be too hard, I am great at plotting, just terrible at coding! But, this gives me hope that I’ll get better with time. So, thank you!

Feel free to send me the link for you story when you publish! I’d love to read it

May I please have your Insta? I would love to post this on my completely empty Instagram, lmao! 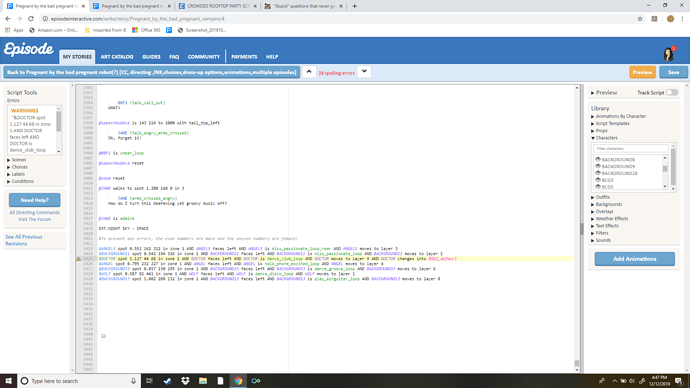 If I’m not mistaken… that needs to be on it’s on line. If that makes sense.

Thank You, but are there any with the table actually visible? I’ve seen authors use them in their stories I just can’t find it.

are there any with the table actually visible?

#in your script and see.

Yes the overlay is included. How come the overlay is built like that then? Because it doesn’t make any sense. Why would episode make a background like that for the character to just be behind it?