Provided, I haven’t read MANY good comedy stories on episode that ACTUALLY make me laugh out loud, I was pleasantly surprised with this one. 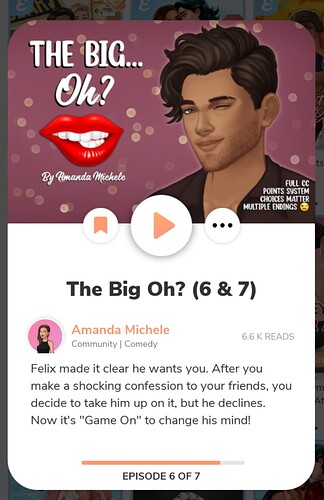 ‘The Big Oh?’ by @amepisode is truly a comedic masterpiece.
The innuendos and the double meanings really make you rolling on the floor as it’s absolutely hilarious. The love interest is also sooo admirable and sexy in the best way possible. I’ve literally never enjoyed an episode story to this extent LMAO.

The characters are delightful and it never feels like the love interest is crossing boundaries or making the MC feel uncomfortable, as it’s acknowledged very elegantly in the story dialogue as well.

You end up actually ROOTING for the 2 main characters to end up together instead of ending up in a steamy ‘relationship’ and some stupid misunderstanding/drama occuring to screw you both over later, like we’ve seen a million stories do before. (Not saying that this trope is bad, there are some incredible stories with that concept as well. I’m just saying that it’s a bit overdone.) So it’s really delightful to see something so different and unique.

And the point of this review is, to support this masterpiece. It’s so underrated and deserves millions of reads. The directing is flawless, the backgrounds and overlays are well placed and directed and the DIALOGUE MANNNN THE DIALOGUE!! It’s the best thing on earth. For real, the dialogue is so engaging and witty in every single scene. You can’t help but fall in love with the characters and laugh.

The author is so so talented and it’s about time we give COMEDY stories just as much love as we give the romance/drama stories!!

Some screenshots depicting why I love Felix so much:
(But hey, no amount of screenshots can do my boy justice as he’s really the mvp of episode LIs in my opinion.)

this is so amazing to read. I am so honoured you feel this way about the story. I really wanted to make sure of two things in this story;

It was important for me to promote the building a healthy and consensual flirting relationship, but with some naughty and playful laughs along the way

Also that the comedy theme is the main theme. Yes, it’s a Rom-Com, so there will be romance themes and and some serious moments, but the comedy will remain the overall theme in this story. I just want people to have fun!
To know that this is coming across means the world to me and your review has really made my day. I appreciate you giving it a chance and for taking the time to share your thoughts like this.
Thank you so much

Aah it’s really so interesting to hear authors talk about their work! It’s really so unique and the fact that it’s not getting millions of reads is eating my headddd aansgfsjp. But for real thank you so much for all that you do and I’m so glad you liked my review! I tried to be professional but ik I’m too biased as I m way too invested in this story. I’m not easily entertained (cos i have a short attention span) so it’s so surprising that that story made me so excited haha.

I can’t wait to read more chapters and support you!!