This featured story choice is not right…

Alright, the most recent episode featured story “unPerfect Cheerleader” which is an episode version of LadyDianna’s story. I completely blame episode for this. There was an option to help the Love interest’s sister who was getting bullied- 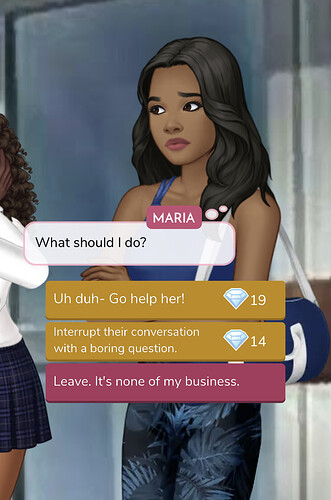 What’s messed up, is that episode made it a gem choice. In my opinion, I don’t think it was right putting that as a gem choice. Especially because bullying is something serious and forcing someone to buy/use gems to help someone getting bullied? I personally think episode shouldn’t have put a gem choice for that.

Also, please don’t blame LadyDianna as this is episode’s version of her story!

I just needed to vent this out.

Yeah I agree choosing the free option shouldn’t force someone into going against their own morals, especially when doing so harms other characters.

In Ruptured Heart they make you choose between being nice to your mother as your last words to her, or rude. That’s the true definition of messed up.

yes I remember this! Made me so upset. I was about to say joe but then I accidentally clicked the gem option and wasted a bunch of gems.

Had that happen to me a few times too

. Lost 29 gems on a bikini that unlocked 2 lines of dialogue max. Such a joke

. I don’t even remember what story it was from, I just know that I was reading for gems.

I love how they’re placing gem status over human decency now. It’s like you need to buy kindness.