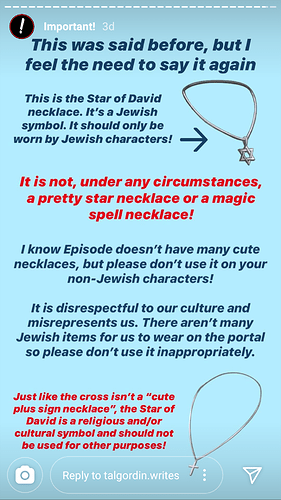 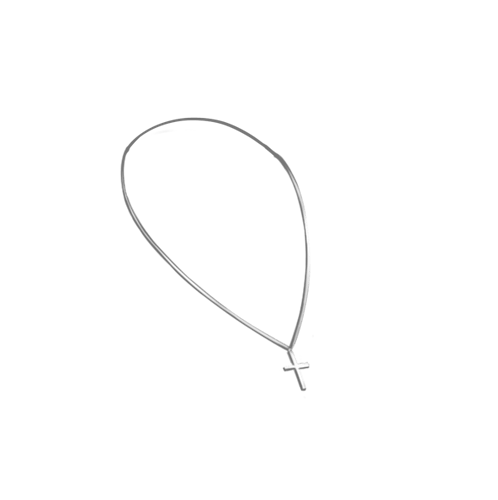 (Bear in mind, that the information below if from Google, basic research.)

A cross necklace is any necklace featuring a Christian cross or crucifix . Crosses are often worn as an indication of a commitment to the Christian faith and are received as gifts for rites such as baptism and confirmation.

If you are not religious:

Wearing a cross pendant necklace is a belief for those who believe in Christianity, but for unbelievers, it can be used as a decoration. Both are possible. The cross ornament is just an ornament, nothing to do with God, and has nothing to do with faith. It’s ok to wear a cross necklace.

Thank you for this

Everyone is using this necklace and I’m like: “Oh, so the character’s Jewish?”
But they aren’t :((

Ikr, Episode really needs to hurry up and add a cultural assets tab on that writer’s portal. But anyway, I’ll keep on spreading this information If I ever come across a story with cultural assets that is being used inappropriately.

That’s one thing that makes me stop reading a story. I can’t believe people can disrespect other cultures like that. It’s getting disgusting. I’m sorry but it needed to be said and thank you @lanafrazer_episode for making this!!!

Np, I’m glad @TalGordin said this FROM THE BEGINNING. Let’s keep on spreading the memo!!!

This is very informative, I had no clue about the necklace!
So I will go through the Outfits of my story to see if I used them on a non Jewish charachter

Damn I didn’t know that.
I have to remove it on some of my outfits.
Honestly, they need to add some sort of disclaimer or tab so people use it correctly.
I guess people didn’t know the backstory and use it an accessory. This was very helpful. Thank you!!

Thank you so much @lanafrazer_episode for sharing my story on the forums! And thank you to everyone who supports this and are willing to go over their outfits to make sure they didn’t use the necklace by accident. I don’t get why Episode couldn’t add the word Jewish to the Star of David necklace name but it’s a Jewish symbol and should only be used for Jewish characters

but for unbelievers, it can be used as a decoration.

I actually never heard of that (but I’m not Christian so don’t count on what I’m saying because I could very possibly be wrong) but several people DMed me following my story saying that they’re Christian and hate to see the cross necklace used on non-religious characters.

I’m glad @TalGordin said this FROM THE BEGINNING

Just wanted to note that I’m not the only one who said that, @BarS said that quite a few times as well

Misuse of our symbols is a big deal for Jewish people

I actually never heard of that

same here, but I got it off Google, and I am a Christian, I don’t wear it often, but I think i have seen some people in my country wear it, some do and some don’t. We DO have decoration of the cross necklaces, like gold cross necklaces.

what about the mala beads?

I’ve already told an author that she is using a cultural asset in her story that needs to be removed.

i mean, what characters can and can not wear mala beads?

Plus, I am already seeing characters, wearing new updates cultural asset for a fantasy story, i think.

Thanks for the heads up! Gonna go through my outfits and see if I’ve used it

We really need to stop seeing cultural assets being used for purposes such as decoration and fantasy stories. You know what? I think we need to ask Episode to put a small sign on the corner of cultural items’ frames in the art catalog to indicate that it’s a cultural asset, and if you point your mouse over that sign it will say something like “This is a cultural asset which should be used for cultural representation only”. Hold on I’ll photoshop an example of what I mean.

what characters can and can not wear mala beads?

Mala beads represents a lot, depending on it’s color, so I am doing some research about them currently at the moment.