This really annoys me

Tbh I’m a nerd with or without glasses.

Idk, most people wear glasses these days, so…

I think most authors like to do the old school geek.

It’s such a typical stereotype. Come oooon, you can show that in other ways…
Also, why would you categorize people at all?
Like, what makes you a nerd?
I feel like the definition is mostly on appearance. Because I mean, we are all nerds… we just like different things and show it in different ways.
Sorry for the weird rant my dudes.

I know a million people that wear glasses, but I would consider very few of them nerds (I’m not calling them dumb either tho).

I wear glasses tho, and I’m a TOTAL nerd!

I don’t really care how the author shows it, but I found this. 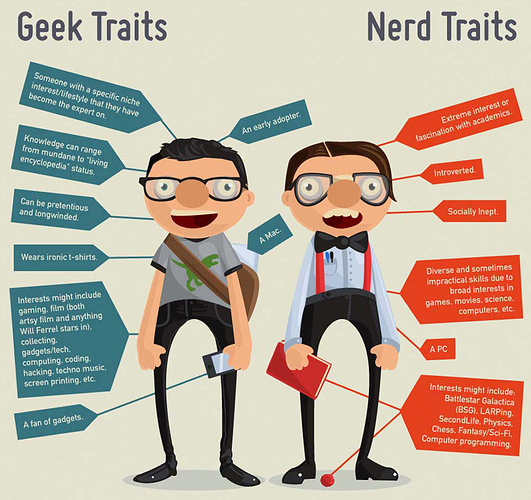 Exactly! I wear glasses and ngl i think it’s quite offensive by saying “oh look, this character is a ‘nerd’ so he/she must wear glasses because that’s what makes you a ‘nerd’”

Like, obviously there are people that would consider themselves a ‘nerd’ or a ‘geek’ and do wear glasses, but that’s all just coincidence. Most people wear glasses these days.

Yea, I mean… my eyesight has nothing to do with anything other then my vision being blurry.

I don’t really care how the author shows it

Same, with or without glasses. Doesn’t bother me.

I new story I am working I asked for an opinion if my character looked Asian. and I a got a few comments about removing the glasses.

I use glasses when I read and write. but not evryday. glasses is not a fashion trend for neards people need to see. also I know a lot of neards who do not have glasses

Honestly it’s up to the author on how they observe certain things, and what they wanna put on their story, so I don’t really care about it.

I know! It just annoys me how most of the time authors displays nerd as cHaRaCtErS wItH gLaSsEs. I mean, nerds can be without glasses too! I had no glasses a couple of years ago, yet I was a nerd. No hate to the authors who do that, I mean I also do them myself since most people think people with glasses are nerds.

i’ve never seen a “nerd” in a story without glasses…

On the one hand, yeah, “nerd = glasses” is definitely playing on cliches and picking the low-hanging fruit. However, there isn’t no correlation between the two.

As the use of screens rises and outdoors activities decline (cough)hover-parents(cough), the instances of nearsightedness are going to rise, beyond the 60%-ish that they’re at now lol, until just about everyone has glasses. So the stereotype will fade in time. Maybe the stereotype will even reverse; the kids with glasses will be the city kids who have all the best video games, while the kids without are the ‘broke hick kids’ who spend all their days playing outside with rocks like some kind of LOSERRRRRS. (/sarcasm) But for now, the stereotype is kinda dumb, but not baseless.