I do not know what I am doing wrong. Is this not how you do it? Also, for some reason my outfits aren’t found on the script? Like I made an outfit but I can’t find it when I type ‘@CHARACTER changes into ____’ it just isn’t there.

ummmm i honestly dont know? can you send like a few lines before that line too? maybe there’s something before that that’s causing the error? 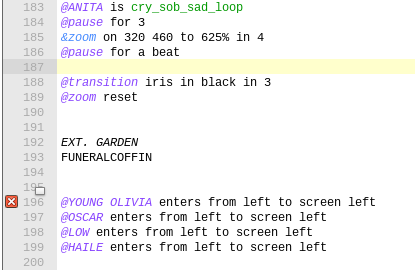 maybe try moving up the line that says ‘funeralcoffin’

is that a background or an overlay?

What is that on line 193? Is that an overlay because that would definitely be the problem.

yea! pretty sure if its a overlay you would do

or EXT. GARDEN with FUNERALCOFFIN

idk which one would work hahaha

then you could spot direct and move to overlay to where you want it to go and add that to ur script :))

or EXT. GARDEN with FUNERALCOFFIN

This is the right command I’m pretty sure

yea- had a feeling haha

That’s what I was going to say as I have never seen the first one used ever but I couldn’t highlight it as my tablet won’t let me.

@erinx The FUNERALCOFIN is on separate line so the script thinks it is a character… therefore he is expecting some dialogue and not command.

WAIT LASNDNDIB I DIDNT EVEN NOTICE THE OVERLAY…