A little over a month ago we released Gem Choices to all authors on the platform. So far things are going well and we’ve been working hard behind the scenes to make sure that gem choices are a good experience for both Creators and Readers.

One of the things we’ve been paying attention to in the last month is how authors are using choices and entering the Writer Payments program. The previous criteria to qualify were laid out in our release post and were as follows:

In an effort to make sure that gem choices in stories meet a minimum quality bar and are good experiences for readers, we are updating the criteria slightly to account for this.

Starting today (June 12th, 2018), in order to qualify for Writer Payments through gem chapter reads you must earn 100k gem choice reads AND you must have 300 gem choices selected in your story within 60 days. This will be reflected on the counter for the Writer Payments section, which you can see below: 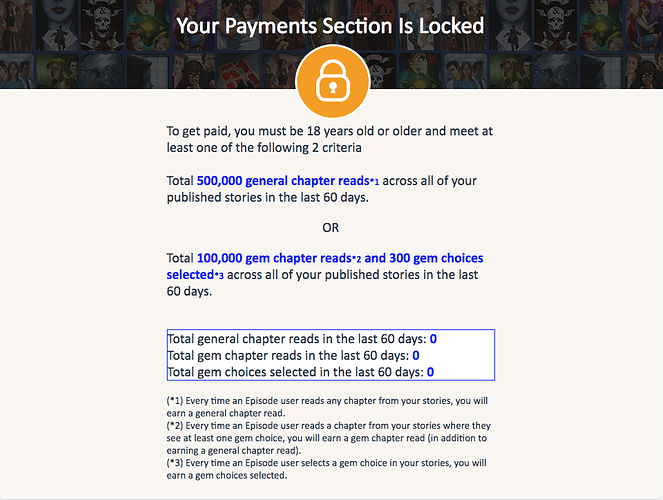 If you have an issues please contact our support team here. Otherwise feel free to share your thoughts below

Ok so that makes it more difficult right? Because it’s not enough for people to include them in the story but you have to have people actually click and purchase them. If I understand it correctly, I’m not sure that’s the best update.

Not really… The previous one(500k reads in 60 days) is still there so how does it make it more difficult?

Ok so maybe I’m confused. Didn’t including chapters with gem choices count as bonus for the 500k requirement for reads?

I’m pretty sure you’re understanding correctly. That’s my understanding as well. It’s not enough to just have the gem choices- 300 choices must be “purchased” within the 60 days.

Not a huge fan… can live with it though.

I think what would’ve been amazing is micro-payments for each chapter read or each 3 chapters or even each 5 chapters. The time line can be difficult to achieve if you’re doing complex plotting and or directing.

Whilst I don’t really like this update and still don’t plan on adding gems into anything I write, I can sort of see one positive with this; You’ll actually know when people use gems on your story.

I think this is good. I mean, gem choices are supposed to have hardly written/ extra scenes in them, and I wouldn’t want that to go to waste with no one reading them.

@episode.anisha I would like to know about this as well.

Understandable, but unfortunately this update won’t mean you’ll actually get people to read your gem choices, it just means you’ll know if they do

Yes the payments will be stored until you are legally old enough to collect it.

But can they be collected by our parents instead?

We want to ensure that the gem choices authors are adding meet a minimum quality bar. 300 readers selecting your choices out of 100,000 read means that only 0.003% of readers have to make a choice.

Well, I’d find no point in gem choices if no one really reads them, and there would be no point in the 100k reads + gem choices thing if none of the gem options were being used. I don’t think it’d be too hard to reach, especially as 2-5 gems per choice (due to the amount of reads) doesn’t seem so bad compared to 15+.

If people are putting in low quality gem choices that no one clicks (which they have been) or are trying to cheat their way out by actually telling people not to click on their gem choices (which has also happened) just so they have enough gem choices to qualify for payments, having to pay these authors would be a highly unprofitable and frankly a stupid business move for Episode.

Like, maybe if everyone who added gem choices had followed the rules and made an effort to make them high quality and worth clicking, they wouldn’t have needed to do this, but I can’t blame Episode for changing it this way. It’d be like paying thousands of under performing employees

I think this is a smart move because I have seen some authors put gem choices in meaningless choices which no one will click. I have also seen authors that are putting gem choices in good quality choices that make spending gems worth it and deserve to be in the writer payment program.

I was wondering, as I read this now… let’s say I have 100k reads accumulated within 60 days, and I get to 500k a year after (one story). Then, I’d publish another story, and combined it reaches 500k. I know the reads gained after the 60 days doesn’t count towards the writer’s payments, but the reads that I had within those 60 days, will still count “without expiring” sort of speak? No matter how long has been since I got them. If so, is that how the gem choices will work as well?

◇ Also, if let’s say someone get half of the amount of reads, and half in gem choices, would it be consider for the writer’s payment?

For your second question, I asked that on a different thread and Liz said that the gem chapters also count towards your regular reads, so yes, you’d qualify.