Hi there, I’m having trouble with the gender choices. I had contacted episode but they didn’t respond

I need someone who knows this stuff very well

This is what happened in my story on chapter 14, they got the wrong branches. They chosen the female love interests, but it sending them to the male instead.
If anyone willing to help me out, please contact me on IG @joxilove.write or comment here also can.

I’m not using point, I just using label for the branches, and goto as well. 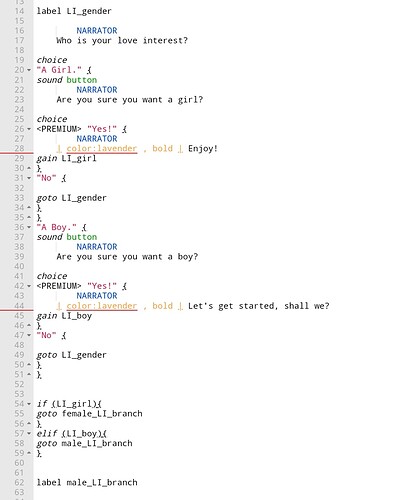 I don’t see anything wrong with the coding here.

So more than likely somewhere between here and the issue you probably have a mixed up or missing goto or gain in the female branch so it’s sending you to the mens instead. And if you’re 14 chapters in and only just having this problem, then it’s probably in the last chapter or two.

There’s two ways I know to check (if anyone else knows a better way please say so!):
Run through each line with the script tracker on the web previewer, as you hit every goto/label make sure it’s correct. Since it’s the female line you’re having problems with, I’d start there. This way is more time consuming, but is more thorough, and it also makes making sure any gains are also correct a lot easier.

The second is to open the previewer on either the web or app and check your goto/labels there. You can find it under navigation. However without playing through you can’t check to make sure your gains are correct, so while this way is quicker, it’s easier to miss something.

I would just change the end bit to:

I don’t know if that will fix it or not though.

I suppose you could also try converting any capital letters in your labels and gotos into lowercase and see if that works? It’s been awhile since I touched my portal so I don’t remember if labels work with capitals.

I have one of my reader told me after the female intro finished, when it comes to the customization part the male appears.

Does it matter if the intro come first or the customization first?

I don’t think it should matter the order, but could you post your coding for that section? 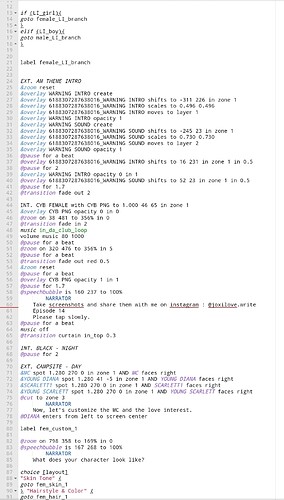 I’m still shakey on using overlays but from I understand they look correct to me. Also I’ve not done the individual avatar customizations before, I just use

Which lets them become the profile they use on the app. Only issue with that last one is that if they have a male profile it’ll glitch and cause a bug. So you’d need to change it to:

I’ve used the first one to allow the reader to customize NPC characters before, so it shouldn’t cause problems there.

Have you used the individual customizations before in the story without issues?