What do you guys think about the new feature story”Prosecutie”

I personally think the story boring. The story is just cliche where the girl likes her “sexy” teacher. I don’t really understand the title. What’s y’all thoughts?

Lol honestly I don’t care because I won’t read it but what is the meaning of the title??

I think the title mean her being a Prostitute. The title says it all.

i mean not going to lie.
Lawyer and Me was a great story.
It gave me anxiety though😂.
but as for prosecutie… I read a few minutes in.
I see they changed some stuff.
Like Tyler and Mr.Smith fighting…
Episode creators has this obsession with making two males fight over a girl. This weird obsession with teacher and student relationships and they have this weird obsession with the mafia.
I feel like episode should of just left it alone

Wow. Wish I could report the title lol

Something is wrong with episode. I think they going bankrupt. I stop reading when I see gems choices.

I think the title is a play on the words prosecute and cutie? I didn’t think it had anything to do with her being a prostitute.

but if they’re going bankrupt why are they featuring another story? doesn’t feature stories make more money than non featured stories?

i forgot that😂
I forgot feature stories makes us pay for gems and use gems.

Been there…read that…couldn’t get past the first episode.

They should have kept the name “Court Me”.

I don’t read Episode’s featured story because they all always seem to be centered around the same plot. I have nothing against the author who wrote it though

I think she’s studying to be a prosecutor. Does that make sense? Prosecut-ie?

(Just a fun fact) I actually read the instagram story where Mette M. Peilekis (missmonarch) called out the people who complained about Prosecutie. She said that the community could be so draining and that it was wrong to blame the first-time featured author and ruin her moment. Ironically enough, I don’t thing this is cleo’s first Episode featured story, like I’ve seen her before, and even more ironic is that Mette became famous thanks to her story The Teacher (where she promotes a teacher-student relationship). Now I have nothing against Mette, I just think that she should use the influence she has for something other than promoting teacher-student relationships and blaming the community. Still, I may be wrong

I’m pretty sure it’s Cleo’s first featured story, but it’s a remake of The Lawyer and Me which was a top trending story for a while.

Maybe I’m wrong, I’m just sure I’ve seen her name somewhere (like on a featured story or something). But I can’t put my finger on it. Like I said, I’m likely wrong.

I understand that love stories are what works, but are fed up. Let’s say the story Bad Girl Boss I thought it be interesting, action, and in the end all about a guy. Love is part of life Not everything will be more interesting than a story be more adventure. As for passing from morning to night to the reactions of the guy and what a girl said It’s not a story It’s not a plot It’s like bits of love life 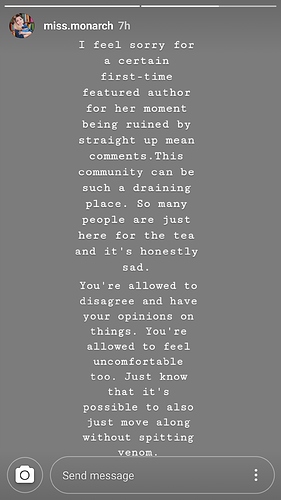