What is the easiest way to write a pick a gender story?

So you know when you want a reader to pick the gender of themselves of LI, people say you have to make 2 separate scripts which looks like a lot of work… how do you do it? Do you do one big script and go through it slowly to change the gender and names and pronouns etc?

I was wondering if I would seem easier to do that but scene by scene? for example let’s say we ask the reader if they are male of female, female =1 and male =2
(Or use gains)

And would this work with choosing the LI gender? for example

Narrator
Which one best describes your play preferences?

But still whats the easiest way?

Also does the @character1 changes into Character2 still not work with different genders or can we do that now?

It’s not nearly as hard as it looks. I have two gender customizable LIs, and readers can choose to be straight (two male LIs), gay (two female LIs), or bisexual (one male LI and one female LI), so that works out to three branches. I write all my dialogue first, and any time I use pronouns for either LI I write it as -he/she-. I also use gender neutral names, so I don’t have to go through and change these.

When I’m ready to code, I code the straight branch first since the male LIs are physically larger than the female LIs and take up the most space on screen. When I have completely finished the coding, I’ll do my bisexual route. To do that, I’ll copy and paste the code into a blank script, CTRL+F “LI1 MALE”, and paste “LI1 FEMALE”. Then I play through and make the minor changes to spot directing. Usually you have to scale the women down so they don’t look like giants. Then I repeat for the gay route, and make the other LI female as well. Finally, I’ll CTRL+F for “-he/she-“ and fix the pronouns according to route. I would say this takes me an additional 30-45 minutes per chapter.

I also do sort of break it down by scene. In the scenes neither LI is in, I just code it the once. If only one LI is in the scene, I only need to code two (a male and a female route for each).

I use character points, so my very first chapter I asked for sexual orientation, with Straight=1, Gay=2, and Bisexual=3. Any scene with just one LI, I don’t technically code the bisexual route. If, for example, someone was playing the bi route in a scene with my female LI, that means 2 and 3 points would both equal female LIs. I would just do:

The thing that will help you the most is using labels and goto, so definitely make use of those, as well as CTRL+F and pasting.

I hope this made sense, and feel free to ask me any other questions! I can also post a screenshot of one of my scripts if that helps! I know it seems like a lot, but it’s really not that difficult and makes your story much more impressive and inclusive!

Also, I haven’t done a gender customizable MC yet, but I would do it in the exact same way. Write it, code as a male, and then CTRL+F to convert them to female.

EDITING THIS TO ADD SOME SCREENSHOTS

This is my code at the very start of my first episode, where the reader establishes their sexuality (“SEX”), and how it appears in the app (it’s tappable, but you can do it however you want). 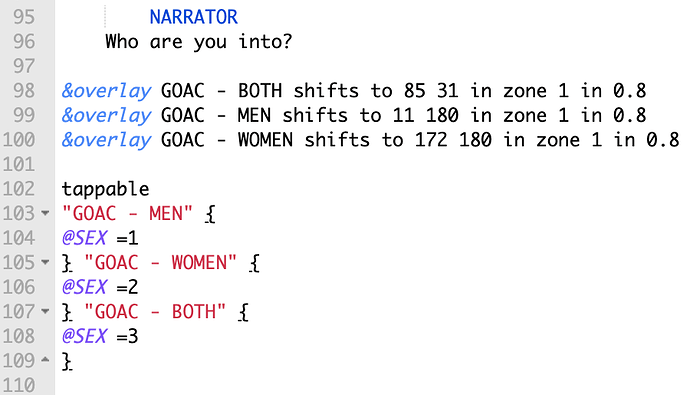 Here is one of my single LI scenes. Imani (in the script as NURSE MALE/FEMALE) comes to my MC’s door. Imani is male in the straight route, and female in the gay and bisexual route, so in this particular scene, I only had to code two routes: straight and everything else. You can see I used labels to dictate where which route the reader will play as it keeps the script more organized.

Here is a scene both of my LIs are in. There is Imani and Casey (in the script as MEDIUM MALE/FEMALE). Casey is male in the straight and bisexual routes, and female in the gay route. 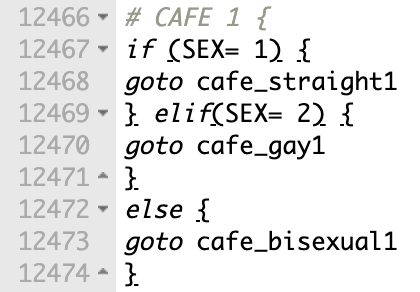 And then you throw it under some headers for organizational purposes, and voila! 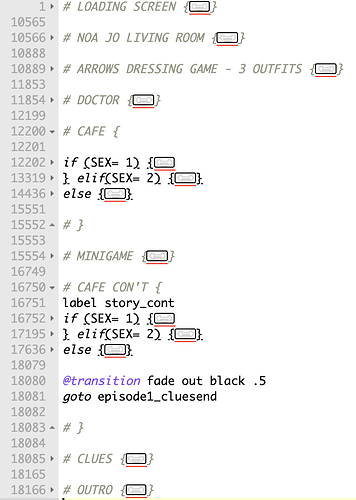 Screen Shot 2020-12-28 at 6.11.55 PM732×1026 92.3 KB
3 Likes
Is it hard to code a story with two gender options as the LI?
Two love interests, Coding question
Choosing gender
I want to make the readers have a choice of Gender for a child, how do I put it so that it continutes throught the story?
How to code choice for female or male love interest along with reader permission to customize
A beginners guide to Everything Episode
A beginners guide to Everything Episode
Letting the reader pick their MC
Matilda_the_lovely December 28, 2020, 10:29pm #4

Personally, I do 2 branches. One for me MC. one for female MC. It’s cleaner.

Then for the separate LI, I do scene by scene because the LI is not in all scenes.

well you can eather do this in each scene ot you can on start create one if/elif/else and basicly have 4 stories running each separate for each choice.

You will have less if/elif/else but you will have to take anyway care that each branch is coded right regarding the variations.