The paw patrol movie came out and it adorable. So I did let my family do the quiz on what pup we are.

You can do it to here the website to the pup quiz below.

If you wonder what paw patrol character I got,
I got Marshall. Also he my favorite character from the show. 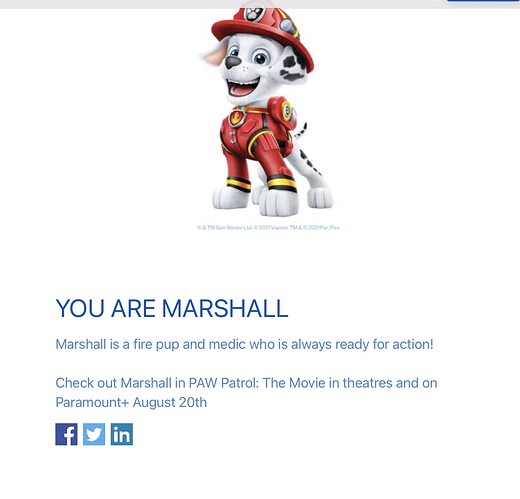 YOU ARE CHASE!
Chase keeps the streets of Adventure Bay safe and under control. His tracking skills are legendary and often called on for rescues.

Check out Chase in PAW Patrol: The Movie in theatres and on Paramount+ August 20th

Tried uploading an image, but my wifi doesn’t want to work

Yea, Marshall pretty neat as he like animals and pup fu, I seen most of paw patrol show too. A new episode come on this Friday on Nickelodeon.

I have never watched paw patrol because it doesn’t interest me but I got Rubble.

Chase keeps the streets of Adventure Bay safe and under control. His tracking skills are legendary and often called on for rescues.

Nice and paw patrol is popular kids as sponge bob.

Umm I used to watch it when I was young

I-uh…well, I just did it bc it was fun to see what everyone got; plus, I used to watch paw patrol when I was younger

I still watch it for now during the pandemic.
I hope to see the movie soon.

my fave character is marshall too
but i got rubble