What's Happening with The Queen of Freaks? - Update!

If any of you are interested in the story The Queen of Freaks, I would like to give you a massive apology for how long it’s taken for me to update and give you some information on the FAQ that I’ve been getting through my FanMail as of late.

When will you update?
Very soon! I know I haven’t updated since December 2017 or even done many of the grammar reviews I was planning and I’m truly sorry about that! I have a full explanation in the newest episode, but in short, I had a lot of personal issues to go through which made it really impossible for me to focus on a good episode. I wouldn’t ever produce anything sub-par or mediocre, so I thought it was best to wait until I had the headspace to write properly… especially considering I was under a lot of pressure and I thought I didn’t want to add any unnecessary stress on top of how I was already feeling. Right now, all I’m waiting for is my backgrounds to be approved and I’ll be back on track! I hope you understand!

When will the Princess discover her powers?
That’s actually going to happen within the next few chapters, provided that I don’t realise I want to add in something else that’s equally important. You see, her discovering her powers is a turning point in the story and there’s really no going back to the comfortable school atmosphere after that. I don’t want to rush it because I want the romances to be able to flourish a little before that happens and make sure that everyone understands the complicated lore. When she discovers her powers, we’ll be moving into Season Two of QofF, which is a massive step that I don’t think the story is ready for just yet!

Why aren’t there any LGBTQ characters?
There are actually a few. Just in case people have forgotten Beth, she’s still out there and she’s still really, really important for the story! She’ll be featured later in episodes of her own so that you know what she’s up to. Her story is gonna be heart-breaking, but wonderful to write! Diversity is important to me and I don’t just want to throw in people’s sexualities (gay, bi, straight or otherwise) just to say “hey look! My characters are diverse!” I want my story to be full of genuinely diverse characters and in real life, things like sexuality aren’t just thrown in your face. You might know some people who you didn’t even realise were gay. When it becomes relevant, you’ll discover that there are LOADS more characters who are part of the LGBTQ community, including two of the most important characters in the spin-off, Much Ado About Anabelle!

Can I be in your story?
I was planning on doing a giveaway, but I don’t really think I have a very large active readership at the moment. I have a small cohort of really, fiercely loyal readers and then a lot of people who like my story but aren’t really involved all that much. I can’t blame them, really! It’s my fault for taking so long to update. Until I get some more people on board, I don’t think it would be sensible to have a giveaway! I might not have enough people interested and on my insta!

Do you have anything else planned in the future?
Yes! Queen of Freaks is just the start of a massive multi-story “franchise” involving the Darkness! You’ll see a lot of fan favourites in later stories and enormous things will happen. I don’t want to bite off more than I can chew at the moment, though. Here are the names of a few of the stories waiting to be published:

Will you finish The Queen of Freaks?
Yes! I’m not sure how long it will take me, but I promise it will be finished! I have no intention of abandoning it, so unless I get sicker, I will keep updating!

Will you ever publish more frequently?
I hope so! However, at the moment, I am doing a Masters Degree at university, working three jobs and battling my own illnesses. To be honest (and this probably sounds really bad, but I feel like I can say it to you because this isn’t a particularly judgemental community), if I qualify for Writers’ Payments and my blog starts making a little ad revenue (by people being interested in reading my writing tips), I’ll be able to take a little bit of the weight off my shoulders and spend more of my time writing for Episode. At the moment, I need to do loads of other stuff to make sure I can survive. Money is an issue! I hope to be able to quit one of my jobs at some point and write part-time for Episode, publishing on a weekly basis.

Do you have any regrets?
Yes, actually! They’re very coding related. I wish I had given the Princess the set name I’d planned for the novelisation: Evanna. I also wish that I had created the upcoming family characters earlier so that I could ensure that everyone’s family members looked like them, instead of having to ask my readers to edit them separately in the next chapter. I wish I had stuck to green eyes for Vince instead of letting people customise. These are small things that I’m working around, but QofF is my first story on Episode and I could barely code the directions when I started! You can probably see the massive difference in quality in the first 5 episodes compared to the later ones. I’m learning so much as I’m going along, which means I may do a revamp at some point or just edit this story to make it better.

Do you have any advice for story writers on Episode?
I don’t presume to be an expert at Episode, but my experience with writing and my English experience (doing Language and Literature at University and being a fully qualified EFL teacher), my nature as an avid reader, my various discussions with scholars and the plethora of creative writing classes I’ve led and participated in have given me a lot of information on how to write! I recommend a loose plan that you’re not afraid to adapt at any point! Also, make sure you know WAY more about your characters than you have revealed in the story. That will help you create more three-dimensional characters because you know things we don’t and you let them influence the way you write the characters. Also, make sure you get your grammar as good as possible. Otherwise, the message can easily get lost and you’ll leave your readers feeling thoroughly confused. Really importantly, make sure your title is good, catchy and memorable. Silly titles or long-winded, boring ones make people less inclined to read. Check out my blog (link above) for more tips!

That’s it from me for now! Please, please, please don’t hesitate to ask me any questions you can think of! I am so sorry it’s taken me so long and I hope you understand!

I personally like my princess being called Suzie-Q tho

It must be hilarious to play the story like that xD

For everyone who’s waiting for the most recent update, have a look at one of the character pieces @ChaoticDeluge created for me! 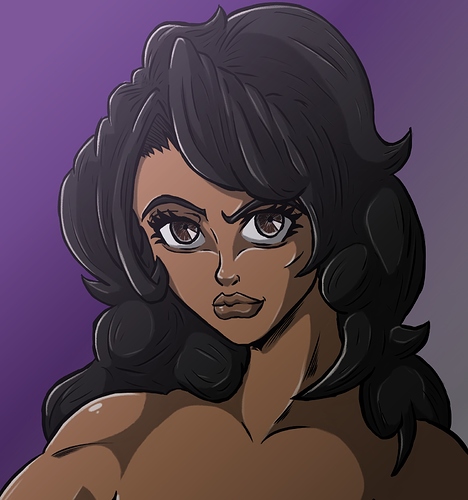 This is how the Princess, Evanna Reign, actually looks! Isn’t @ChaoticDeluge fabulous?

The new chapter is out and I’m super excited

The new chptrs out? o.o
I gotta read it
Also i like to name my character n.n
Thanks forupdating this story and keeping us posted.
P.s…cant wait to read your other stories all the titles sound great

It’s great to have a loyal reader like you! Thank you so much for sticking around even though I took ages! I’ll keep you posted

Welcome ^///^ im invested…cant get rid of me now ha…
Glad you are keeping readers updated. Looking forward to more

I’m also currently working on a revamp in Limelight with the characters how I imagine them. The new chapter of the original is my priority, but look out for that, too!

The new chapter is OUT! Finally! After God knows how long…

I hope you enjoy!

I hope you enjoy reading

pennys back ‘u’ Yay glad shes fine[/spoiler] i like the relationship between me and my sister(normally lil sisters in episodes are awful bratty and dumb. Glad we get along wth each other)[spoiler]Cant wait to see how our relationship wth vince goes seems like he hates us a little bit less…idk…(and his development as a character) and more importantly our powers _

I’m glad you liked! I’m working on the script outline for chapter 18 now! I can’t wait!

So my story, The Queen of Freaks, is #4 in the fantasy category at the moment

and I just wanted to know if anyone in the community has read it and what they thought of it.

This is a thread for people who have already read the story, not a promotion for my story! You’re welcome to read it if you want to, of course, but this isn’t a post requesting R4R or reviews or anything. Just honest opinions of people who have read it.

I strongly believe that constructive criticism is essential, so don’t be afraid to tell me what you really think!

Its intresting so far lotta love has been put into it. U can tell n.n u made a whole side story about wats going on back in our kingdom thts dedication. I love tht the MC isnt rude( or as ppl love to say sassy) im curious of vince and what will come in our interactions wth him and our eventual showdown with our father(i assume thts gonna have to happen)
I hope tht we dont become this rude “strong” girl meaning shes mean/rude to ppl or staff and thts makes her independent/fierce theres nothing wrong wth being gentle and independent
I also hope vince doesnt become generic nice guy just to make him a better LI. He needs to be nicer definently but i hope its not a dull type of thing…like how most LIs are just there as an acessory. On tht note i like how Theo says his feelings to us and doesnt pressure us for an answer annnd still helping us hes sweet n.n
I like tht anabelle cares for us and is kind in her own way. She agressive but not like most ppl in stories…her agressive nature is still a caring one(not a “care” wth abusive undertones like most stories)
I still wanna know our powers 0_0 im glad we have to actually work for them.

sorry im not too good at reveiws(ill add more later)

Thank you so much for this! I really appreciate the review! Don’t worry – Vince is always going to be the broody type. He’s just going to have his world challenged and shaken as the story goes on to make him a little nicer (deep, deep down). He and the MC are still going to argue and annoy each other from time to time, because that’s just who he is

I’m glad you think none of these characters are bitchy! I know that sometimes MC and Anabelle can be sassy, but it’s always in good jest!

They act like siblings n.n
Yeah sorry if i rambling or repeating things
Yeah i dont mind teasing in relationships but constant back n forth bickering is not a good relationship but thts just my opinion
Oh and alk the clothing options ^-^ i like choices ha…so ty