Why does Miss MJ make her female characters SO WEAK

I think it’s because a lot of people read her stories it tends to overwhelm her to go a certain point for her to release an episode it kind of got the best of her. Maybe that’s why. All her female characters look the same (for example beach waves women in and small mouths for men Ink). They could all pass as relatives or what not. No background check or how it happens before all that fiasco. Most of the female characters are all house wives and have nothing to do but talk about their husbands, kids and relationships. It kind of gets boring and a lack of variety of opportunity for these characters in a mansion and are all submissive. That’s so sad that they have no freedom but are all under the care of a rich stranger whom pick them up from the streets and work illegally. You can’t just marry or fall in love with a man you just met. (physically and mentally considered hot but not) that’s just wrong in all levels of a romance and more toxic. That’s not good (I know it’s just a story but in a subjective manner it’s a serious topic to consider.)

I never liked her as an author because she needs her attitude to be in check and also her inspiration on her stories are some what lazy writing and too much profanity used (mostly her male characters the abusive boyfriends of all her stories.) I’ve seen some posts about her being bullied because nobody would read her stories because it’s cliche and too repetitive and blah blah or someone said this and they are using it against me. I’m thinking OMG is she so stubborn to listen or not. Because most of her brainstorm ideas for a story are all recyclables and used for her inevitable story time one hit wonder.

If someone is going to give her feedback on her stories and what needs to improve in these concepts. She need to earn these faults not consider them as bullying or avoid the matter. She needs to earn up these criticism to make her stories better. Not whinge about everything. Oh my god people are "bullying"her as an author because they don’t like my stories. Cry me a river. She becomes so defensive about it when all her stories show what NOT TO DO when you open up a relationship with a kidnapper or gang leader they can use that information against another (aka mc) character for an advantage all the time. You’ll never know what the guy will do to use it against you.

Sorry I had to let this all out because she needs to take criticism and feedback in a mature manner than a spoiled child not liking her story. I I agree @Hila with what you have said. 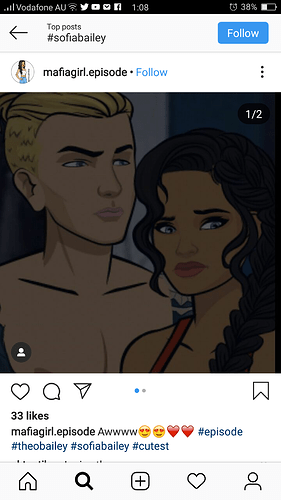 A Picture can say a thousand word. What do you think is wrong in this Picture??

Naive and not so cute of a so called Romance

The chick looks so miserable there and the dude looks like he’s ready to abuse her even more. Nothing cute about abusive relationships!

There’s no excuse for her petty ass behaviour. Pisses me off.

Ikr! I can’t believe she went that low.

Always does, she blocked me.

Instead of her blocking or pointing out everyone who is voicing their opinions and stating what is really going on in her stories, she should take some time and take it into consideration, instead of going off about it.

I heard she was a really nice author though???
I mean her stories are wheeeww but she herself wasn’t a bad person?

Why? What did you do?

I called her out. Someone asked to add CC to her story. She and her fans attacked that person. I saw it and well, called her unprofessional and told her to stop acting like a bitch.

Damn that was bold of you. I’m glad that you did that though!
If you can remember, what did she exactly say to the fan?

Something about wanting the characters to look that way? Not sure.

Damn you must have called her out for her nonsense that she decided to block you? Wow. She’s such a brat.

then again, Abby in taste the darkness is super sassy - and is headstrong

I don’t think creating stories that glamourize abuse is a good thing. Besides, isn’t that against the guidelines? The guidelines that we must follow and various popular authors break, but don’t get punished?

Please be kind to one another. We do not tolerate harassment or cyberbullying anywhere in our community. This may include, but is not limited to: