What’s the original to this story? I can’t remember the name, but I know it’s a popular one. 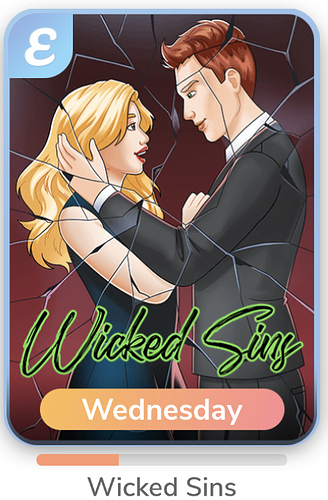 The original is called “Wicked Sins” by Regina (:

It’s the same title I think 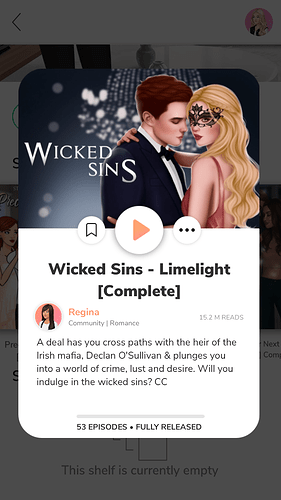 I thought it was one of those MJ stories

I’m so lost I swear

How’s the story so far?

It’s a very familiar girl-meets-mobster story. It reminds me a bit of Mafia’s Girl. She works as a server and meets him there. (I feel like he offers her a job? Honestly I finished the first two chapters and instantly forgot what I’d just read.) Then they find out he’s set to be in an arranged marriage with her horrid sister. I couldn’t get into it, personally, but I find mob romances deeply boring.

Yep yep, I agree. I actually exited out midway in the first chapter. It’s a very typical plot and not much different from others I’ve tried to read. I just couldn’t get into.

If you’re into that kind of story/plot then you’d probably like it. I personally didn’t find myself getting attached to it because I’ve seen it many times before haha but to each their own

Although the new hair is cute, it cannot hide the fact the CC is so basic, it doesn’t even use Premium coloured choices

did you read the whole thing?

Lol, not yet. As @Cee said I’m also getting Mafia Girl vibes here as well, so who knows?

I’ve read some chaoters. I haven’t gotten to the “He has potential” part because she isn’t interested in anyone just yet. I was happy for that but the author writes for her dialogue something like “I haven’t found anyone to open up my heart to” and it makes it an obvious set up, but the MC besides that isn’t what I ca totally cliche.

The one thing that screams cliche to me is the MC’s cousin, Evelyn? She’s the typical rude rich girl, but her character is literally there to be a punching bag. The Boss rejecting the girl for the MC, but they’re suppose to be in an arrange marriage yet they don’t even attempt to talk to each other at all. The boss is overly fixated on a female he barley knows because she’s beautiful, his “Firefly”

He finds out the family’s treatment towards MC and his blood boils, but it’s like you hardly know the girl. The MC had one interaction with him that was funny, but after that she shows know sign of even wanting to be around him because the scene is usually with Evelyn.

I just find that dynamic disgusting, yes Evelyn may be rude, but these are adults that don’t seem to take alot of responsibility for an arranged marriage. A least give her a chance and not make it obvious ploy, but the author also just happens to make Evelyn a slut and has s*x with some random person all in one scene/moment. I just feel this whole sub plot is too easy and predictable.

With the exception of the MC of course. She has “Mind my business” character She tends to dismissive of herself in certain situations.

I’ll add screenshots from the story if I read it again if this rant doesn’t help.

you just told me the whole story without me having to read it.

Weirdly one thing I kinda like about this story is that it isn’t obnoxious with gem choices, let alone gem outfits. It feels kinda weird not being so bombarded by them though.

What’s also kinda annoying is how the story tells not shows when introducing characters but oh well. Not to mention the LI’s dad looks identical to him that I thought that LI had another twin named Patrick.

You know what’s funny? Earlier there was a gem choice to get this elegant gown which is MC’s ‘style’ or else get this thing. And Declan was told that his fiancé was a woman ‘in a beautiful dress’. Either he has terrible fashion sense, or the branching was wonky here

The story is kinda boring

dont come for me

I had the discourtesy of reading a bit of the first chapter of Wicked Sins so far, and it’s almost obvious which stuff Episode had in or had the writer change. For instance, there were less demeaning comments (or at least downplayed) made by MC and her friends to Britney (who’s apparently the only stripper in the club), and the scene where MC confronts a handsy customer on another dancer is completely added in the Featured, replacing this Long-winded explanation of MC’s living circumstances. At least it explains how Declan was first interested in her. IDK though, they’re still small attempts to mitigate the main relationship and plot.