Will having marijuana use in my story break guidelines?

It’s in Colorado where weed is legal. I just want to make it a fun experience, would it break guidelines?

I want to know this answer too…

What can’t my story include;

So as long as its brief or lightly used you should be okay.

idk if this is excessive but I want to leave a portion of the episode where my character gets high and learns to let loose and have fun for the first time, so I don’t know how that will come across

You have to just be mindful that there are young teenagers reading stories which is why they say to keep it appropriate for readers 13 and older, using drugs in your story has be used so carefully that you don’t want to come across as promoting the use of drugs to minors.

I have seen multiple stories which blatantly suggests people in the story are using marijuana & getting high off of it. I’m not sure if it’s against the guidelines or not, because all though it’s considered a drug it’s also used heavily for medical purposes. I think as long as you aren’t directly promoting underaged smoking/smoking marijuana to your audience, it should be fine. Correct me if I’m wrong though!

I read “The Marriage Counciller”, and one of the character’s main roles was smoking weed and… “sleeping”. The story went over quite well, and the charcter was quite funny. I think the point is to simply use it well. Don’t make them like, obsessed or whatever.

I believe this could be a dangerous approach for the use of marijuana. It could almost come across as if you need it to let loose & have fun, especially since you’ve stated it’s “for the first time.” I think it’d be important to stress the fact that your MC having fun for the first time isn’t completely because of the marijuana, but because they also wanted to try something different for a change. Be mindful that a lot of Episodes general audience is full of kids. It’s not entirely your fault, but that’s the reality of it. Just make sure you do it in a way that doesn’t come off as promoting the use of marijuana.

Well, Lucky wrote a popular comedy called Dirty Sexy Teenagers that features a pot farmer who lights his pot farm on fire so the feds don’t find it and the smoke gets all the kids at summer camp high so … I think you’re good 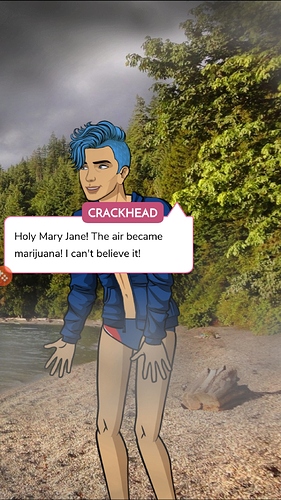 Will it break guidelines? Maybe, technically.
But let’s face it … episode is littered with stories that heavily feature underage drinking as well as date rape drugs.
MJ for a good time is quite benign and you are probably fine to depict it.

I think it all depends on how you portray it.

I’ve seen it alluded to / blatantly referenced in several stories.

that’s true I don’t think I can do it the way I want to, but damn it would have been so much fun to write.

That’s true I had thought some things seem a bit hypercritical.

Yeah, like, if someone watched your story, and was underage and already wanted to try it, you don’t want to tell your viewers that it’s causing him to have fun for the first time- don’t make people want to try it.

You can cover the act of doing it and just show the effect of it, people would be able to read between the lines.

those are not my intentions, my character is a strong minded adult who knows what she’s doing. I just kind of wanted it to be a bonding experience between two characters lol but I get what you mean.

You could be creative have the two characters sitting somewhere, talking about doing something that makes them feel good then do a transition iris 3, then the scene is them dancing or crowd surfing.

Yeah, you can, you just can’t glorify it.

I think this is where you might trip over. I’m not sure if you’re allowed to portray weed as a good thing that makes people learn good things in life. I think it’s best to keep weed usage as a neutral thing and not make it seem like you’re glorifying it