Would Anyone Be Interested In a Monthly Outfit Catalogue? (Poll)

I already Started this but I was wondering if people would actually be interested.
Basically It is like a Vouge or another fashion magaize split in 3 parts. The Plus Size Edition, The Male and Female Edition, and the LGBTQIA+ Edition Series. I thought this would be helpful to find outfits and new styles since many people have trouble with the.
I already started a plus size edition (see cover below) but I was just wondering if people would be interested. Each edition would be 9 or more outfits, and would include any new art releases.

How this idea came about: Today I was doing work for my mom (because she hired me for the summer) and I finally finished so I was going to upload some outfits to my drive that I made/ am making. But then I was opening Medibang (the app I use to edit) and the idea came to me. Why not just put it into a monthly catalogue and split it by outfit styles? I decided to start with a plus-size issue (spending 1 hr 30 min on the cover because I was very indecisive). So yeah that’s how I got the idea.

It would be random dates each month, and it would be free of credit. It also took me a while to decide which 9 outfits I want to include (because I may or may not spend a lot of time making outfits, because I don’t want to see the same background characters in the same outfits).

Anyways share your thoughts via poll and/ or comments.

All votes are private

Cover that I worked on (finished) : 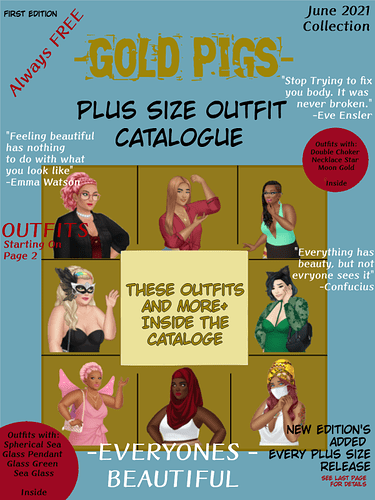 The Area – Outfits With: … – show which new release items were used. For the Design: Looked at a bunch of magazines, which is why it looks, … yeah. (I’m proud of it though)

Edit (Kinda): Spent 20 min wondering if I should ask, here it goes.

Omg I love this! I’m so mad I didn’t think of it lol. You could have people from the different groups submit their characters to model the outfits or something.

What I would love to see is ideas for outfits that work in specific settings that episode’s clothing catalog doesn’t cater to very well. I’m trying to do a fantasy story and while the setting is not meant to mimic a specific time period it is a pre-industrial society of a sort and “modern” clothes look out-of-place. Trying to make a variety of outfits using episodes very limited pool of non-modern clothing has been rough and I would love to see some new ideas. Other examples could be sci-fi or western clothing, or perhaps clothing tied to a specific region.

And obvs plus-sized and male outfits are the most useful because they can be the trickiest to pull off.

Ultimately you should do it if you are excited to do it, but I would be careful of over-committing and burning out. 9 outfits times 3 issues every month seems like a lot to me, but it sounds like you really enjoy doing it so maybe it’s not a big deal. Personally I can’t imagine doing something like that for as long as a year, hahaha!

Thank you for sharing, I actually made/ make a looooot of outfits in spare time because there too many options for me, but I did see many people struggle with putting it together so I thought/ think it would be a good idea.

Judging from the number of threads by people who want “extras” made up for them I suspect you’re right. If you want to do it I think you should, I’m sure people will find it helpful c:

Bumping for the Morning crew (as I call it, since I’m on at both morning and night)

If anyone wants to see what an outfit page would/ will look like here’s it (the names of the outfits seem a bit cringe): 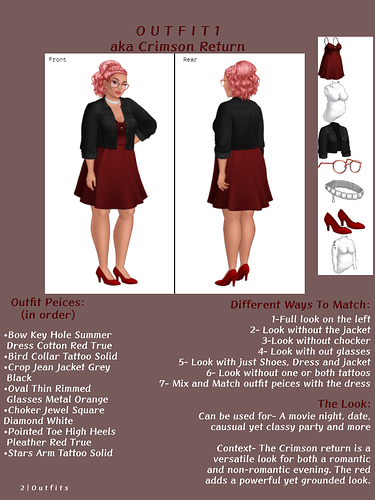 Update: Poll closes the in 5 days (idk if people can see the close date, as I’ve never seen one if there was)

Re-Updating: Poll closes in 4 days, also ty to anyone who took the time to vote

Poll closes in 2 days (I’m nervous yet excited to see the results, if just asking for question btw, I’ll still do the catalogue)

-Ty to those who voted

I feel like the 30 people who voted were the only ones so, if I get no votes I’ll close it in 5hrs.

Poll CLOSED, and ty everyone for the support on this, and honesty in your answers. I’ll be releasing the first issue in either end-end-end of June or early July, cover above is the issue I’m releasing.
Label: GoldPigs-Plus Size-Edition One-Everyones Beatutiful