Would it be okay to use female avatars for AFAB trans characters?

I have quite a few trans characters and I’ve been trying to visualize them as close to what I’ve originally imagined them to be and hence using different types of bodies to depict different characters.

Now my biggest concern regarding this is, if it could be dysphoria inducing if I used female avatars…What do you think?

I’ve seen this in stories before, and I’d say go for it!
If that’s how you imagine it, who are we to stop you?

Yes I think what you’ve come up with is brilliant. As stated above, I’ve also seen this in some stories before and thought that it was rather clever. Good luck on your story, I’d definitely read.

I’m not trans so I can’t speak for trans people, but I do think your characters read as masculine. If you wanted to portray characters that have been able to medically transition, I think it’d be better to use a male avatar. I have a trans male character (male avatar) in a story idea that I’m developing that uses the Crop Tank Cotton Grey Black as a binder. 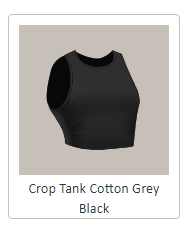 @Hilo & @tosinx thank you so much for your insights! I’ve seen this incorporated into stories as well, I was just worried it might make the readers upset, uncomfortable, or worse: dysphoric which would be the last thing you’d want while creating a story to uplift the LGBT community.

Thank you so much for the insight and ofcourse I’d use male avatars for post-op characters. Thanks for the tip as well, I’ll be sure to credit you if I incorporate that into my stories <3

You don’t have to credit me, but I’m glad you found my thoughts helpful!

for episode’s rather overly feminized or masculine character models, i’d say you did a pretty good job making these characters read as male! i do wish trans men got as much content as trans women on episode, but, small potatoes, i guess!

you did well with whatcha have. saying this as a trans man!

Thanks for your approval, means a lot! And umm I guess it’s rather easier to include trans women in your stories with all the different bodies and the immense (traditionally) feminine assets Episode provides us with ~ which cannot be said the other way around. Let’s hope trans men eventually gets as much as representation as everyone else on the platform! You deserve this.

I think it would be harmless to portray them with feminine avatars. You did pretty well with your examples and I think it would be fine. Gender identity and expression is a large color wheel so it would depend on the person if you’re really worried about potentially triggering someone’s dysphoria.

Thank you, I’m glad you approve. I’ll be putting a trigger warning and hope it’ll be alright!