Writer Payments - Every read does NOT count

So I’ve been pretty excited lately as I just got my story back after it being removed for breaking the guidelines.
It has now been approved and put back on the app and has been around #25-#50 in romance for about a week.

Since Friday, which was 4 days ago, I’ve had about 37 000 new reads on the LL version of my story. So this is not counting the reads on the ink version of the story.
But in the payment section counter it says I’ve only had 11 964 reads, across both my stories, in the last 60 days.
This is obviously not correct.
Today alone the LL version has gotten about 2600 new reads, but the counter in the payment section has only gained 106 reads.
That’s about 25x less reads than I’ve actually had today.

When asking Episode about this, here is what they said;
”The reason for this discrepancy is that not all reads a stories acquires count towards Episode’s revenue. Authors are paid based on reads that contribute to the overall revenue pool, which may be a lessor number of reads than the total reads you see on your script page.”

Does this make any sense to anyone?
It doesn’t at all to me. Why isn’t every read counted? Do they have to be special reads in some way?
In the actual payment section it says to unlock it ”You need a total of 500 000 general chapter reads across all of your published stories in the last 60 days.”
And in the footnote is says ”Every time an Episode user reads any chapter from your stories, you will earn a general chapter read.”

So this means, every chapter read should count, right…?
To me, this doesn’t sound right at all.

Message them again, How are you suppose to know their overall revenue to even contribute to? That is not what is stated!

Discrepancy, a lack of compatibility or similarity between two or more facts. A word commonly used with money.

What does this have to do with the general reads across my stories? The words are very clearly stated in simple words which mention nothing about renevue this hidden ‘discrepancy’ just means your tricking a lot of episode authors. Its already unrealistic goal in itself. So what’s going on?

You can take the above part and send it because even I’m confused as to where any if this was understood.

I replied to their email, including screenshots of what is clearly stated in the payment section on the portal.
I mean it doesn’t say anywhere that not all reads are counted.
It does however say ”EVERY TIME an Episode user reads ANY CHAPTER from your stories…”.
So that is a lie then.

We think we’re working hard towards an achievable goal, but once we think it might be within our grasp, what says on their website doesn’t actually apply.
Maybe authors wouldn’t spend so much time and hard work on making great stories for their app if they really knew this.
Seems like false advertising & making a false claim to me…

every chapter read should count, right…?

that contribute to the overall revenue pool

Does this mean they’re not counting the first chapters that don’t have ads? That’s really confusing.

Are you using gems as well?

I don’t use any gems at all.
But it does say that every chapter is counted in the payment section.
This is what all the authors who have unlocked it has been saying too.
Not sure if this is something new they’ve started to do so that they don’t have to pay people anymore or what. 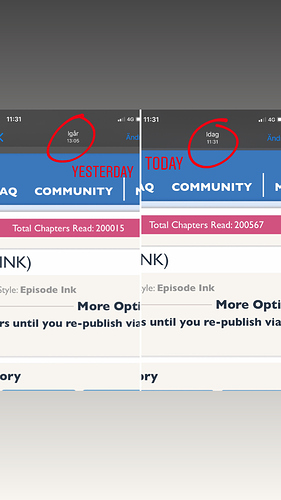 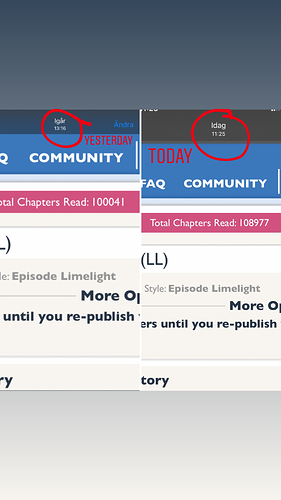 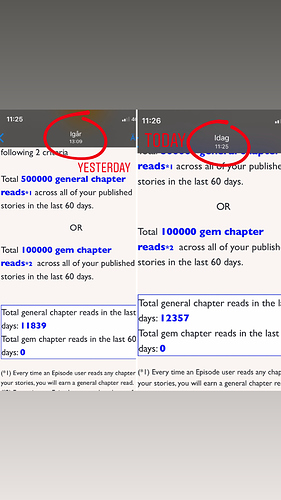 The first two photos show how many reads my stories (ink & LL version together) have actually gained since yesterday.
All up, that comes to 9515.

The third photo shows the payment section read counter, and that has only registered 518 of those reads since yesterday.
Which means it has ignored almost 9000 new reads.

I did wonder if the read totals could just be delayed at updating (they used to update in real time I think, but maybe there’s a delay?), but the variance doesn’t make sense if you’ve gained 37k reads in 4 days (it should definitely be higher than 12k). That’s odd and their response is strange too. First I’ve ever heard that.
Edit: Question- was your INK version removed before as well? I’m just wondering if that’s the only story that’s gaining you payment reads at the moment?

@amberose I’m dragging you in

since you’ve been looking at your own. Thoughts?

Ok, ok, ok. Alright, truth be told I love analyzing shit like this. I’ve quoted what I think is possibly the key to figuring this out here.

Which means it has ignored almost 9000 new reads.

Now… I don’t know if or how long you were tracking your reads prior to your LL version being removed, but is it possible that 61 days ago you got a huge amount of reads that was 25x the amount you got in the past 24 hours?

I’ve been tracking my count for almost 90 days and I had one day were immediately after updating, my reads in the payments window starting to decline lol. With one of your stories being removed for a decent period of time, this seems like it could be possible in your case too

Actually, let me get a graph

Edit. I abandoned the graph

that’s why I think it would depend on what was going on with @ld_episode1’s story around two months ago.

I still think it would be impossible to only show 11k reads if 37k was gained in the past 4 days? That should be the minimum at least? I understand the read total decreasing, but the past week’s reads should be in the total.

I- you know what. Ignore me, you’re right, I was doing this all backwards. It would have to be a minimum of 37000 reads in the past 60 days.

But wait… for this part

Today alone the LL version has gotten about 2600 new reads, but the counter in the payment section has only gained 106 reads.

Does it make sense for the discrepancy to be here because 2500 out of the 2600 new reads are replacing ones some from 60 days ago?

Does it make sense for the discrepancy to be here because 2500 out of the 2600 new reads are replacing ones some from 60 days ago?

Okkkkkkkkkk, well… That’s as far as I can get then. It doesn’t make sense. Like Episode’s response to the ticket makes no sense to me because it just sounds like…

I’d be interested to know if anyone else has this happen to them. Yet, I think unless you’re proper tracking your reads, then no one would notice so long as the difference wasn’t as big here.

I wonder if this has actually been going on for ages lol. I remember @Rubyllee had a similar confusion to read counts but this was when she did add gems and we just chalked it down to all the many gem glitches, but idk now I’m not sure so am tagging her to get this conspiracy ball rolling.

I edited one of my responses above and I’m wondering if the previously removed story isn’t being calculated properly? (I’m assuming it was banned and not just suspended from the ranks?) So the reads showing are purely on the INK version? (Assuming that wasn’t banned?)

Could be… but the reply to the ticket is throwing me off because it’s like they’re admitting it’s supposed to be this way. Granted, I don’t think the people who reply to tickets alway fully understand the tickets they reply to and so that may have caused some confusion too

he reason for this discrepancy is that not all reads a stories acquires count towards Episode’s revenue. Authors are paid based on reads that contribute to the overall revenue pool

Ooooh! Actually, when reading their response they’ve responded to payments and not the read count.
In payments, after a month closes, your read count shows as “estimated”. This total number is subject to change after Episode reviews it.

From the payment FAQ:

Why did my total of reads change as the status was updated from ‘Estimates’ to ‘Confirmed’?
As we review your reads, we might find issues with corrupted data. It is expected that total will slightly change and only the ‘Confirmed’ total is to be considered valid and final.

I think whoever responded to this ticket may have read it wrong.

Thanks for replying!
No, but the reads I counted on my actual story page, we’re all after the story was put back and approved.
So you’d think they should count

I really don’t know what their ”logic” behind this is.

She meant reads gained >60 days ago. If you had a high number back then, your total read count could decrease. Your numbers still wouldn’t make sense.

Did your INK version get removed as well? If not, would 12k reads in the past 60 days make sense for this version alone?