I’m supposed to be working, so naturally I’m reading this because I’m procrastinating lol. I’m on episode 2 and I actually spent gems on the house party

I like that you can earn fire points to spend on things. I wish they could be used on more things.
It’s a bit all over the place but it’s more exciting than work so…

The first episode makes me feel like I’m on the drugs.

At least the clothing that the different characters wear and the point system make it a decent-enough story to read for fun.

It’s not that bad.

But yeah this is kinda weird Episode makes a reality dating show when they are already featuring one, but I guess what the story’s target audience is people who like Love Island or its game form 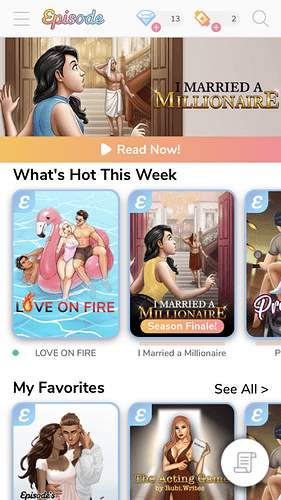 People really bitched so much that they made episode change the cover. Both look great, I wished that people would think before they speak, though.

Seriously, I get the anonymous bottle, but the people … kissing? Sacre bleu!

But even the IG community cannot get opposed to this, it’s literally the cutest thing ever

The bottle could have been anything. Hell, could of been spring water. But, of course, everybody who bitched in the comment section all have sexualized covers. That was the funny thing about it.

I agree. They did a good job with the cover. But, episode needs to stop succumbing so easily.

Wonder how they would respond yet?

Anyways, getting back on track, weirdly I haven’t read this yet in all the … mess. But it is still weird they currently have two stories about reality shows at the moment

Are their artists magicians?! How did they get that done so fast?!

I doubt they will. They don’t have a reason to.

I read up to chapter three in beta version. I’m chapter one in this version, but yeah I agree. I actually like reading/playing reality show games/stories. So, I quite like it. Even though,

The first episode makes me feel like I’m on the drugs.

LOL, even though it does make me feel like I’m high.

So tired of having the dusty old CC while the supporting cast all have newer features. Wtf?

I agree. The beta had missing features as well. In fact it was missing a lot. I really don’t understand the point of that. I rather not cc at all.

Oh, no, I meant the IG community’s response. But see, this proves how much to their behest Episode listens!!!

Judging by the story so far, I’m assuming the new Update Thursday would revolve around beachwear?

Ah, my bad. They probably won’t have anything to say. And, I was thinking that as well. I seen a whole bunch of free swimsuits all through episode one. They are cute, but we don’t need more right now lol.

I want more banter and a charming supporting cast in this villa mansion. So far this is all like WhO’s HoTtEsT?

There were so many. I couldn’t keep up. Natalie is definitely the hottest and the one with the dread buns. And, the Lottie lookalike lol.

I got this story and like 3 seconds later it disappeared

It must have been a back-up or something, that’s the only thing I can think of.

Like how sometimes lately older Featured stories have their covers changed as a bit of a revamp? The same thing must be this